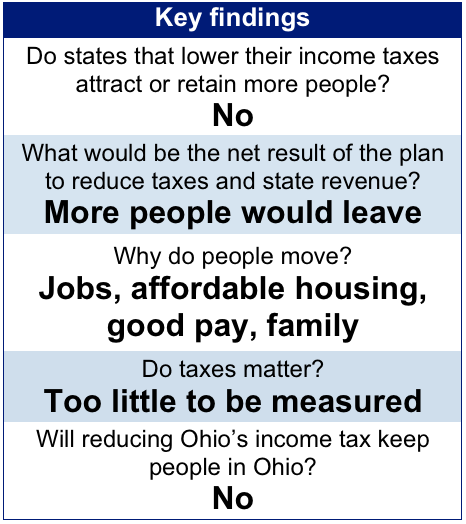 Very few Americans move across state lines each year, but those who do make those moves based on employment, unemployment, income, housing affordability and higher education opportunity, not taxes, according to a new analysis by Policy Matters Ohio.

“Even large increases in income taxes do not lead to changes in migration,” said Amy Hanauer, Policy Matters executive director and a study author. “But adequate revenue is essential to creating a state economy with excellent schools, universities, worker training and infrastructure.”

Gov. John Kasich’s proposed tax changes would reduce state revenue, substantially cut the taxes of the wealthiest and slightly increase the taxes of Ohio middle-income and poor households. The Kasich administration cited a belief that personal income taxes “encourage out-migration from a state” as a rationale for reducing income taxes.

Our study, “The Tax Flight Myth,” examined the relationship between taxes, other economic issues, and interstate movement for Ohio and surrounding states. We found that even a large across-the-board tax increase would not have a statistically significant effect on movement between states in the Ohio region. By contrast, similarly sized changes in unemployment insurance claims, housing affordability, or property crime have statistically significant effects on migration patterns.

The study also found that a loss of revenue for the state would result in people leaving the state, especially if the public sector reduced employment or did not hire when it otherwise would have. Even more might leave if property crime were to increase as a result jobs lost in law enforcement or other public-safety sectors, according to the study.