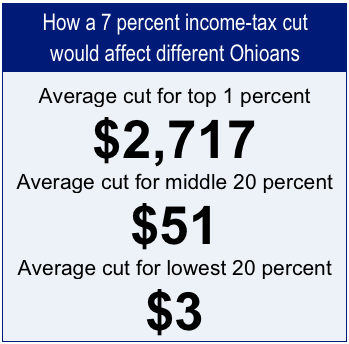 “The proposed business-profit exclusion will do little for Ohio’s economy, while draining more than $600 million a year from public services,” said Zach Schiller, report author and research director of Policy Matters Ohio. “The General Assembly should remove it from the budget.”

The new tax break would create the second largest exemption in Ohio’s tax system. Most qualifying taxpayers employ only themselves and are unlikely to hire workers in the future merely because they get a tax cut. The vast majority of business owners who benefit will get too little tax savings to add employees.

Since the legislature approved the 21 percent state income-tax reduction in 2005, Ohio has underperformed the nation in small-business growth. “There is little reason to believe that another round of tax cuts will produce a different result,” Schiller said.

The new tax break would cover owners of S Corporations, partnerships, sole proprietorships and other businesses known as “passthrough entities.” Ohio does not tax the businesses directly on their profits, but rather as the profit passes through to the individual income tax returns of the owners. The proposed business-income tax exclusion would allow owners to exempt from taxation half of their share of income from such entities, up to $750,000 a year. The tax break also creates potential for new abuse of the tax system, since it will create an incentive for owners to reclassify their income as “profit”