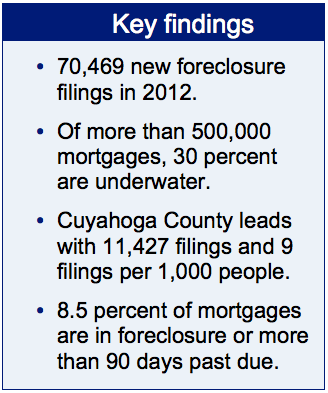 Ohio foreclosures remain at crisis levels, with 70,469 new filings in 2012, according to the annual foreclosure report released today by Policy Matters Ohio.

The study, based on Ohio Supreme Court data, found that the number of new foreclosure filings dropped only slightly from 2011, by about 1.5 percent, while the number of filings in 2012 remained more than four times higher than it was in the mid 1990s. Ohio filings peaked in 2009 at 89,061.