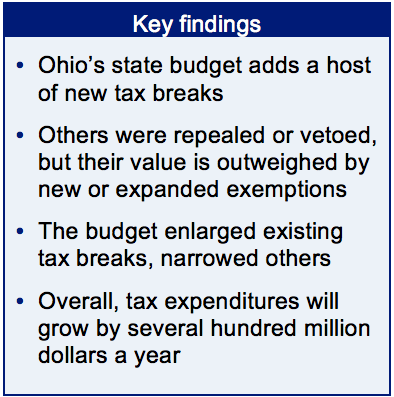 The nonpartisan research institute examined changes in tax exemptions, credits and deductions made by the General Assembly in the recently approved two-year state budget.

“The state is losing money for needed public services because of the growing number of exemptions, and there is still no system for determining which breaks are worth keeping and which aren’t,” said Zach Schiller, report author and research director at Policy Matters.

A new exemption for business income will cost the state more than half a billion dollars a year, making it the state’s third largest tax expenditure, the term for exemptions, credits and deductions. Legislators also created exemptions for for-profit grain handlers, certain fraternal organizations, cable TV companies, and others. Various existing tax breaks were expanded as well.

The budget bill ended some tax breaks, such as an income-tax deduction for gambling losses and the sales-tax exemption for magazine subscriptions. Gov. John Kasich appropriately vetoed others that the General Assembly would have created, including restoration of a sales-tax exemption on investment coins and metal bullion, and a new sales-tax break for goods and services used in aerospace vehicle research and development.

Not all tax breaks are bad. Though constructed so it doesn’t help some of the poorest Ohioans, a new state Earned Income Tax Credit takes a small step toward correcting a state and local tax code that requires low-income families to pay a larger share of their income than the affluent do.

“The General Assembly should set sunset dates for all of our tax expenditures, and provide a permanent way to examine all existing and future tax breaks,” Schiller said.