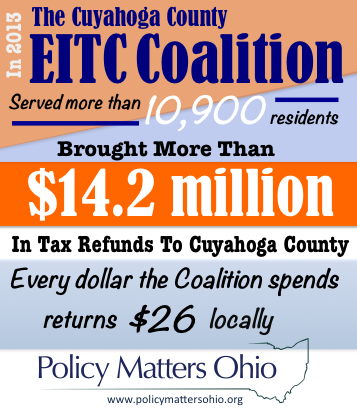 The Cuyahoga County EITC Coalition served 10,982 residents during the 2013 tax season, bringing more than $14.2 million in federal and state tax refunds to the county, according to an evaluation of the coalition’s work released today by Policy Matters Ohio.

Established in 2005 to provide free, high-quality tax assistance in the county, the coalition works by helping Cleveland-area residents file their taxes and by helping taxpayers who qualify claim the federal Earned Income Tax Credit.

“The coalition continues to grow, brings substantial resources to Cuyahoga County, and helps relieve poverty for working families,” said Amy Hanauer, executive director at Policy Matters. “It’s crucial that we figure out how to bring the project to scale so that it can serve a larger portion of the community.”

The federal EITC is a refundable tax credit for low- to moderate-income working families and individuals that helps them keep more of what they earn. EITC claims alone brought more than $5.6 million to the county, according to the evaluation. This year, Ohio lawmakers took a positive step forward by putting in place a small non-refundable Ohio EITC, a bipartisan initiative that will benefit low-income taxpayers in our state.

The EITC Coalition is led by Enterprise Community Partners and includes more than 40 partners.