Over the last 30 years, median wages have fallen in Ohio as growth in our education levels has not kept up with other states. This paper finds a clear and strong correlation between the educational attainment of a state's workforce and median wages in the state, providing more evidence that Ohio should invest in education. 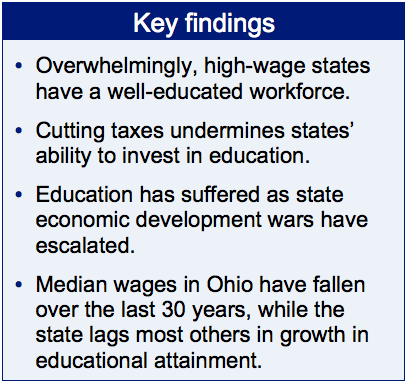 States that invest in a well-educated workforce will see returns in higher-wage jobs and a more productive economy, according to a paper released today by the Economic Analysis and Research Network.

The report, “Education Investment is Key to State Prosperity,” found a strong link between educational attainment in a state and both productivity and median wages. Expanding access to high-quality education will create more economic opportunity for residents and do more to strengthen a state’s economy than anything else a state can do, study authors found.

“States have fewer tools to build a strong economy than the federal government does, but states do play a major role in education