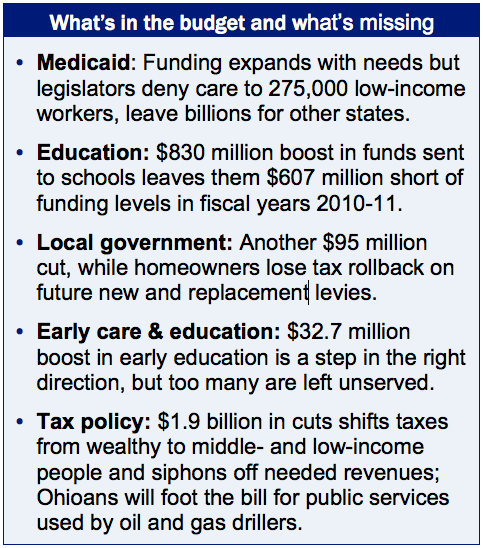 The new state budget’s General Revenue Fund will grow by $4.5 billion over two years, but did not restore key investments to 2010-11 levels, according to a review by Policy Matters Ohio. The budget also cut taxes by $1.9 billion, shifting taxes from the affluent to those with less income and making it harder to adequately fund critical services.

“This budget includes some important investments in health and education,” said Wendy Patton, senior project director for Policy Matters and a report author. “But the ongoing cuts to local communities will hurt Ohio.”

Local government, which lost a billion dollars in revenue sharing in the last budget, will get $95 million less state aid in this budget, and lose property tax rollbacks for new and replacement levies.

The budget increases spending on health care, but the legislature’s decision to reject Gov. John Kasich’s proposal to expand Medicaid means many Ohioans will be denied coverage and that we will send billions of federal dollars to other states. The budget increased funding for education, but leaves schools $607 million short of 2010-11 levels and diverts a larger share of state money to charters and vouchers.

Other areas that will get an increase include services for the elderly and disabled, natural resources, economic development and community services within corrections. The budget also directs new money to areas such as the Ohio College Opportunity Grant, vocational rehabilitation, and mental heath, but doesn’t make up for erosion of these services by years of recession, cuts and inflation.

“Some initiatives, like the new state Earned Income Tax Credit and means testing of the homestead exemption, were a step in the right direction,” said Zach Schiller, research director and report co-author. “But the budget invests too little in education, the safety net and local communities.”

Although tax cuts are often promoted as job-generating, since June 2005, when major Ohio tax cuts were approved, Ohio has lost more than 214,000 jobs, or nearly 4 percent of its total, while the nation as a whole has gained 2.48 million.

“Ohio needs comprehensive health care for all. We must restore the fiscal partnership between state and local government to stabilize our communities. We have to provide early education for more children, and need-based aid that helps all students get through college,” said Patton. “Most of all, Ohio needs a tax structure that is fair and adequate to meet the needs of the state.”