Impact in Ohio to deepen if the month passes without resolution, report finds 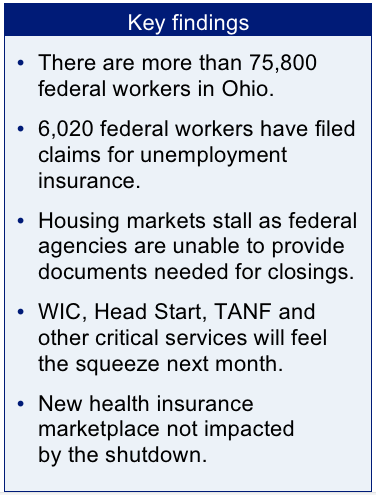 Of the 75,800 federal workers in Ohio, 6,020 had applied for unemployment by October 8, likely because they’d been furloughed as a result of the federal shutdown, according to a report released today by Policy Matters Ohio.

The shutdown’s most immediate impact is being felt by furloughed workers, by small businesses near closed federal facilities and towns near closed national parks, and by homebuyers unable to close on loans because of documents needed from the IRS or other federal agencies.

If the shutdown continues, the impact will spread to low-income families as funds for critical services run out, including programs like the Women, Infants and Children nutritional program, Head Start, Temporary Assistance for Needy Families, and food assistance.

“The federal government provides more than two-thirds of the funding for some of Ohio’s health and human services agencies and programs,” said Patton. “While programs generally have sufficient funds to provide services through October, a shutdown that drags into November threatens a range of services, from TANF to Head Start, WIC and SNAP.”

The report found that rural infrastructure projects have slowed, housing markets have stalled, and national parks in Ohio have closed. The halt in government funding has led to furloughs at NASA Glenn Research Center in Cleveland and for public health workers in Cincinnati.