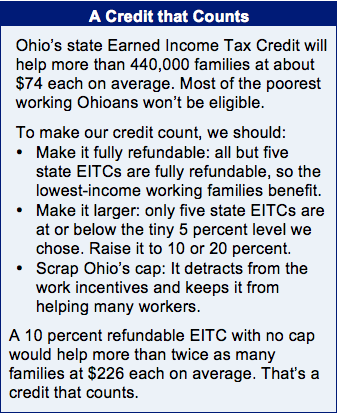 More than 440,000 Ohioans will be eligible for the state’s new Earned Income Tax Credit, at an average of  $74 per recipient, according to a new report from Policy Matters Ohio. However, the Ohio EITC is one of the smallest among state credits and has three weaknesses that mean it does less to help working families and reduce poverty.

Ohio’s EITC is nonrefundable, capped for those with taxable income over $20,000, and set at 5 percent of the federal credit. No other state credit has a cap like Ohio’s, only four states have a credit as small or smaller, and only four have credits that are not fully refundable.

“It is excellent that Ohio established an EITC,” said Hannah Halbert, report author and researcher with Policy Matters. “Unfortunately, because it’s not refundable, most low-income Ohioans won’t benefit, and those who do will receive only a modest credit.”

“The EITC is intended to be a tax credit for working people, but low- and middle-income Ohioans will still pay a higher share of their income in state and local taxes than the top earners,” said Halbert.

Even with the EITC, the lowest quintile of earners will pay on average $12 a year more in taxes under the tax changes passed in state budget, while higher earners will see substantial cuts. The top 1 percent will, on average, receive a $6,083 cut.

“A 10 percent refundable EITC with no cap would help more than twice as many families, at an average of $226 each,” said Halbert. “Legislators should work toward this: a credit that counts.”