Under SB 210, poor residents on average would get $1 a year 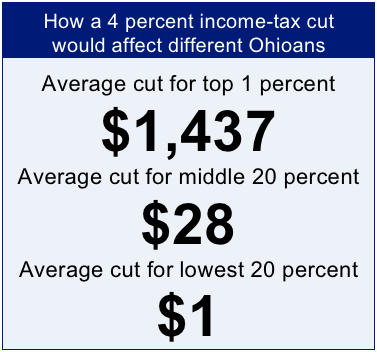 The 4 percent state income-tax cut proposed in a new Senate bill might buy a cheap cup of coffee a year, on average, for low-income Ohioans, while giving more than $1,400 to the state’s most affluent residents, according to a study released today by Policy Matters Ohio.

“The proposed cut would further tilt the tax system in favor of affluent Ohioans,” said Zach Schiller, research director at Policy Matters Ohio. “Ohioans would be better served if we rehired police and firefighters, put teachers back in our classrooms, and invested more to protect vulnerable elderly from neglect and abuse.”

Under Senate Bill 210 as written, libraries and local governments would see additional annual reductions of millions of dollars a year, since each receives 1.66 percent of tax revenues. The bill was designed to use savings from Medicaid expansion for the tax reduction, but it is far from clear that savings will match the size of the proposed tax cut.

The Institute on Taxation and Economic Policy, a Washington, D.C., based research group with a sophisticated model of the tax system, did the analysis for Policy Matters.