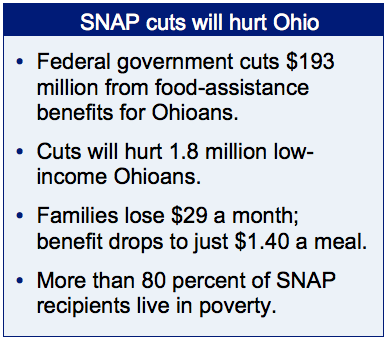 Food assistance will drop on Nov. 1 for some 1.8 million low-income Ohio families, according to a new report by Policy Matters Ohio. The cuts mean $29 a month less for Ohio’s poorest families, as benefits fall to an average of $1.40 per person per meal.

Federal policymakers’ decision to let a temporary boost to the Supplemental Nutrition Assistance Program expire will also slow economic growth in Ohio, as $193 million less in federal funds will flow to the state.

“The economy is still weak in many Ohio counties,” said report author Wendy Patton. “Many people cannot get work, or do not earn enough to feed their families. These cuts to food aid are going to hurt many children, families and communities.”

On top of these already-scheduled across-the-board cuts, the U.S. House of Representatives recently passed legislation cutting $40 billion from SNAP, potentially eliminating assistance for at least 163,000 Ohioans and nearly 4 million people nationwide, including families with children, seniors, people who have lost a job and are unable to find work, and veterans. The legislation would provide strong financial incentives for states to reduce their caseloads, making it significantly harder for struggling families to put food on the table, and would eliminate assistance for some of the poorest Americans.

“The House-passed SNAP plan, coupled with the Nov. 1 cuts, would deal a significant blow to millions of Americans struggling to make ends meet,” said Lisa Hamler-Fugitt, executive director of the Ohio Association of Foodbanks.

Policy Matters Ohio is a nonprofit, nonpartisan state policy research institute
with offices in Cleveland and Columbus. The Ohio Association of Foodbanks helps its members provide food
and other resources to people in need, and pursues areas of common interest.