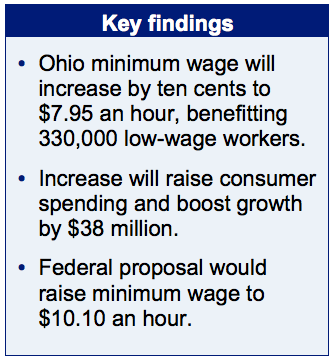 On January 1st, Ohio’s minimum wage will increase by ten cents to $7.95 per hour, benefiting an estimated 330,000 Ohio workers. The minimum wage for tipped Ohio workers will also rise by 5 cents to $3.98 per hour. The increase will raise consumer spending and boost economic growth by $38 million, according to an analysis of Census data by the nonpartisan Economic Policy Institute.