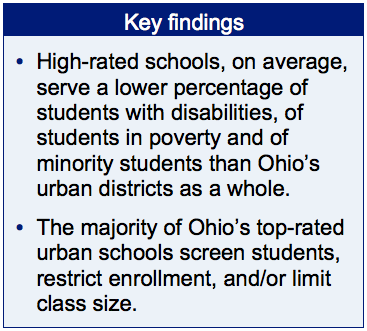 The majority of the highest-rated public schools in Ohio’s eight largest urban districts serve different populations than those districts do as a whole, according to Misleading Measurements, a new study by Policy Matters Ohio.

“We should not pretend that schools serving more troubled or disadvantaged students can easily achieve what top-rated schools do, often with smaller classes and selective enrollment,” said Jennifer DePaoli, report author. “Some high-scoring urban schools are succeeding in the face of difficult challenges, but most benefit because they serve less disadvantaged populations than urban districts.”

Policy Matters looked at schools rated the highest over a two-year period in Ohio’s eight largest urban districts. The study used state, school and district data to examine district-run and charter schools rated Excellent or higher for the 2010-11 or 2011-12 school years. The number of schools examined ranged from two each in Canton, Dayton, and Youngstown to 22 in Cleveland; overall, the study included 57 district and 27 charter schools. The group found that most top-rated schools are not reaching an equal share of students with the fewest opportunities in Ohio’s urban districts.

“It’s essential that we use every tool available to deliver the best education to all children, so top-rated schools certainly play a role in strengthening education,” said DePaoli. “But focusing too much on schools that can’t be replicated can undermine efforts to reach all children and families.”

“To turn around urban schools we need to reward high performance, replicate what works, and be honest about what leads to excellence,” said Piet van Lier, communications director and education researcher at Policy Matters. “We urge advocates, reporters and policymakers to be clear about the challenges and to avoid misleading comparisons.”