More needed to make the Ohio EITC a credit that counts 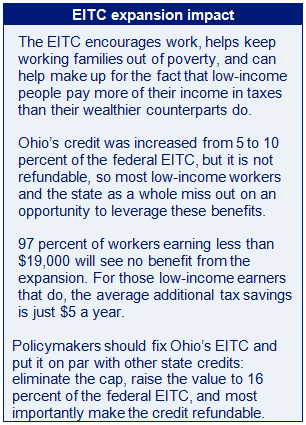 he majority of Ohio’s poorest workers will see no benefit from the recent expansion of the Ohio Earned Income Tax Credit (EITC). The Ohio General Assembly doubled the value of the state EITC, expanding the credit from 5 to 10 percent of the federal credit. Based on an analysis by Institute on Taxation and Economic Policy (ITEP) only 3 percent of tax filers earning less than $19,000 will see any tax savings from the expansion. For the small number in this group that will benefit the average additional annual income tax savings is just $5.

“The EITC is intended to encourage work, help keep working families out of poverty, and help make up for the fact that low-income people pay more of their income in taxes than their wealthier counterparts do,” said Hannah Halbert, report author and researcher with Policy Matters Ohio. “Despite this change, the credit is too weak to reach many of the people it is intended to help.”

The Ohio EITC remains out of step with nearly all other state EITCs, as the federal EITC and nearly all state EITCs are fully refundable. Ohio’s credit is nonrefundable, meaning the credit can only reduce tax liability. It is also capped, so that the maximum EITC that a filer with Ohio Taxable Income greater than $20,000 may receive is half of the tax that is due after certain exemptions. Even with the recent expansion, it is below the average value of other state refundable credits (16 percent of the U.S. credit) and remains one of the weakest state EITCs in the nation.

Policy Matters Ohio is a member of the Working Poor Families Project, a national initiative that advances state policies in the areas of education and skills training for adults, economic development, and income and work supports. WPFP supported this research on the EITC.