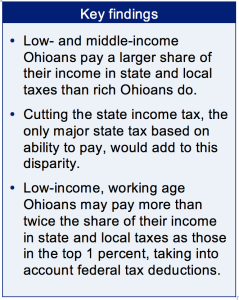 Low- and middle-income Ohioans pay a much greater share of their income in state and local taxes than the state’s most affluent do, according to a study released today.

The top 1 percent of non-elderly Ohio families by income, who earned at least $356,000 in 2012, on average pay 7 percent of their income in state and local income, property, sales and excise taxes. By contrast, the lowest fifth, who make less than $18,000, on average pay 11.7 percent. Families in the middle fifth of the income spectrum, who make between $34,000 and $52,000, on average pay 10.6 percent. These differences are even larger if you take into account that state and local taxes may be deducted from federal taxes.

The national report, the fifth edition of Who Pays? A Distributional Analysis of the Tax Systems in All 50 States, was produced by the Institute on Taxation and Economic Policy (ITEP) and released in Ohio by Policy Matters Ohio. The study’s main finding is that virtually every state and local tax system takes a much greater share of income from middle- and low-income families than from the wealthy, indirectly contributing to growing income inequality.

The report highlights the critical role of Ohio’s personal income tax in lessening the disparity between affluent taxpayers and everyone else. In recent years, Ohio has cut its income tax and Gov. John Kasich has said he intends to slash it further. The state income tax, with graduated rates that increase as income does, is the only major tax based on ability to pay. Figure 1 shows how affluent Ohioans pay less of their income in state and local taxes than low- and middle-income Ohioans do, even though the state income tax offsets some of this disparity.

“The Ohio income tax is critical to a fair tax system and one that pays for education, health and other key services,” said Wendy Patton, senior director of Policy Matters Ohio’s state fiscal project. “Attempts to weaken it will either redistribute income from the poor and the middle class to the rich, or cut needed public services.”

The report measures the state and local taxes paid by different income groups at 2012 income levels. It takes into account the impact of tax changes enacted through December 31, 2014 as shares of income for every state and the District of Columbia. The report is available online at www.whopays.org. 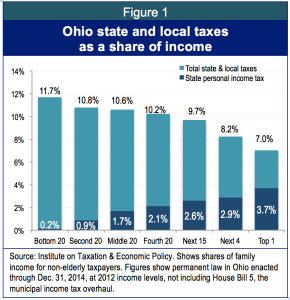 State consumption taxes are particularly regressive, meaning poor families need a larger share of their income to pay them.

A progressive personal income tax, like Ohio’s, helps make a tax system more fair (Figure 1). Who Pays? shows that of the ten most regressive states, four do not have any taxes on personal income, and the others have very limited income taxes. But the income tax is being targeted for major reductions or elimination in states across the country, including Ohio.

In recent years, anti-tax advocates have pushed for tax policies across the country that would reduce rates for the wealthy and businesses. Ohio substantially cut its income tax starting in 2005, when a major overhaul of the tax system included an across-the-board 21 percent income tax reduction. This cut, plus another 10 percent cut and special tax break for business income beginning in 2013, contribute to unfairness in the tax system, which weighs more heavily on the low income than the wealthy.

Gov. Kasich has said he intends to further reduce and eliminate the state personal income tax. There are clear problems with this agenda. Foremost, cutting the income tax makes regressive tax systems worse, because they often rely on hiking other taxes that fall more heavily on poor and middle-income families to pay for tax cuts at the top. In Ohio, this has included increases in the sales-tax rate. Second, aggressive tax cuts that favor businesses and the wealthy can result in states having difficulty adequately funding basic public obligations such as education.

There’s another pressing reason for Ohio and all states to be concerned about regressive tax structures, according to ITEP. If the nation fails to address its growing income inequality problem, states will have difficulty raising the revenue they need over time. The more income that goes to the wealthy (and the lower a state’s tax rate on the wealthy), the slower a state’s revenue grows over time.

“In recent years, multiple studies have revealed the growing chasm between the wealthy and everyone else,” said Matt Gardner, executive director of ITEP. “Upside down state tax systems didn’t cause the growing income divide, but they certainly exacerbate the problem. State policymakers shouldn’t wring their hands or ignore the problem. They should thoroughly explore and enact tax reform policies that will make their tax systems fairer.”

States with a heavy reliance on consumption taxes tend to have the most regressive tax structures. This is because sales and excise taxes fall more heavily on less affluent families compared to those who are better off. The poorest fifth of Ohioans on average pay 6.9 percent of their income in sales and excise taxes, while those in the top 1 percent pay just 1 percent. Lower- and middle-income families also pay more of their incomes in property taxes than the most affluent families do. Even when low-income families do not own property, landlords may pass taxes on to them through rent. The lowest fifth pays 3.4 percent on average, compared to just 1.7 percent for the top 1 percent.

The data in Who Pays? demonstrates that states commended as “low tax” are often high-tax states for low- and middle- income families. The ten states with the highest taxes on the poor are Washington, Hawaii, Illinois, Florida, Rhode Island, Arizona, Texas, Indiana, Pennsylvania and Arkansas.

The federal government offsets a share of state and local taxes because state and local taxes can be deducted from federal taxes. Itemized deductions that many families take on their federal taxes further accentuate the difference between what wealthy, middle-income and poor Ohioans pay. Upper-income taxpayers are more likely to itemize and take advantage of these deductions, effectively passing the cost on to the federal government. Taking these deductions into account, the richest 1 percent of non-elderly Ohio families pays less than half as much of their income in state and local taxes as the lowest fifth do (5.5 percent vs. 11.7 percent).

The analysis includes local income taxes, but does not reflect the impact of changes in the municipal income tax (House Bill 5) approved in December 2014 because the revenue impact was unknown at the time of this report.