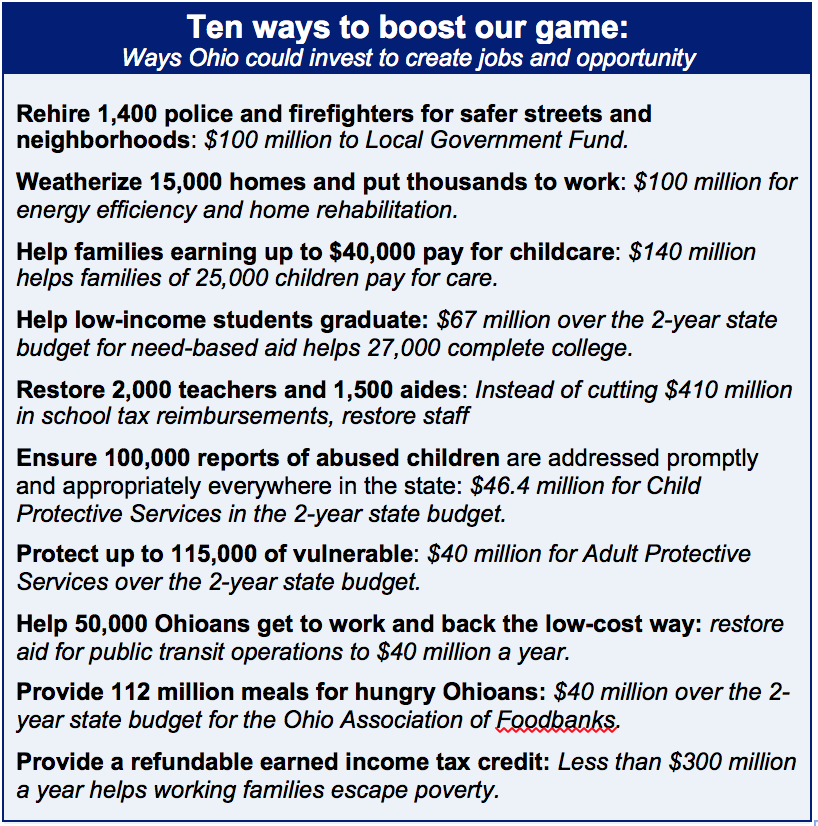 Instead of giving thousands of dollars in tax cuts to the wealthiest Ohioans, lawmakers should restore and expand state investment in public safety, education, home weatherization and other areas to strengthen Ohio’s backbone, Policy Matters Ohio said in a new report.

A decade of Ohio tax cuts have further shifted the tax system in favor of the wealthy, but they have not boosted the economy. Gov. John Kasich’s proposed budget would do more of the same. Ohio’s wealthiest residents would gain nearly $12,000 in tax cuts, on average, while the bottom 60 percent as a group would see a tax increase.

Ohio could instead create jobs and opportunities and improve communities by devoting money to unmet needs. The report recommends the state restore funding so communities can rehire 1,400 police and firefighters, and schools can rehire 3,500 teachers and aides. The state should also restore need-based financial aid for college, as well as funding for public transit.

These are just a few investments needed for the state to prosper, said Wendy Patton, Policy Matters senior project director and author of the report.

“Ohio dramatically reduced aid and college funding and has a lot of ground to make up,” Patton said. “Ohio is 50th in the nation in state funding for child-protection services. The state ranks 38th among states in funding public transit. There is much lawmakers could do to restore communities, enhance quality of life and boost family wealth.”