Local government funding would remain down $1.4 billion over five years. 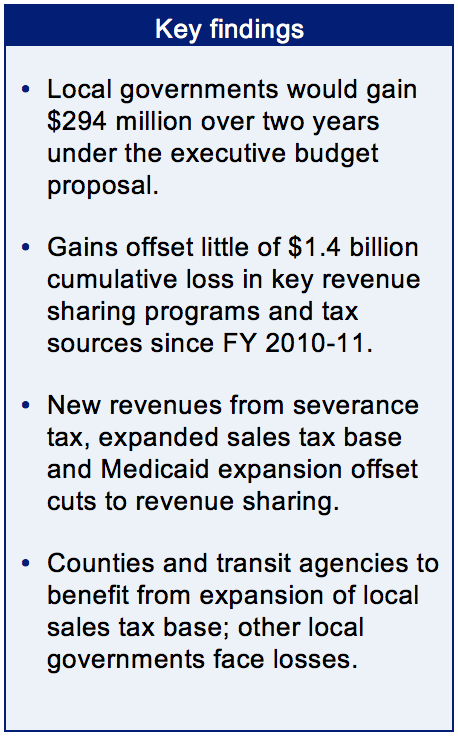 Local governments will have $1.4 billion less in the proposed 2016-17 budget than they had in fiscal years 2010 and 2011, according to a new policy brief from Policy Matters Ohio.

The executive budget proposal resumes the phase-out of tax reimbursements for taxes levied on business and utility machinery and equipment. Loss of tax reimbursements to more than 600 local governments would be offset from a statewide perspective by the proposed broadening of the the sales tax base, retention of Medicaid expansion (which boosts sales taxes), and increase of the severance tax on oil and gas, with a share reserved for drilling-impacted areas.

But the governor’s sales tax proposals are fiercely contested and may not make it past the legislature. Nor would they fix fundamental problems from years of state cuts that have hampered economic recovery, reduced important services in many places and killed thousands of public-sector jobs.

In addition, places that will see gains are not necessarily the same as places that see losses. Counties and transit agencies levy sales taxes and will benefit from the expansion of the sales tax base. Drilling-impacted areas will get funds for infrastructure and other uses. Municipalities, townships and special districts outside of drilling-impacted areas will lose tax reimbursements without any offset.

“Statewide, this budget provides some restoration from a low point, which is a good thing. Nonetheless, many local governments will experience losses, especially special districts that provide health and human services,” said Patton. “This is not the time to resume cutting. We need investment in Ohio’s communities and people, not more cuts.”