Half the income tax cuts would go to top 1 percent. 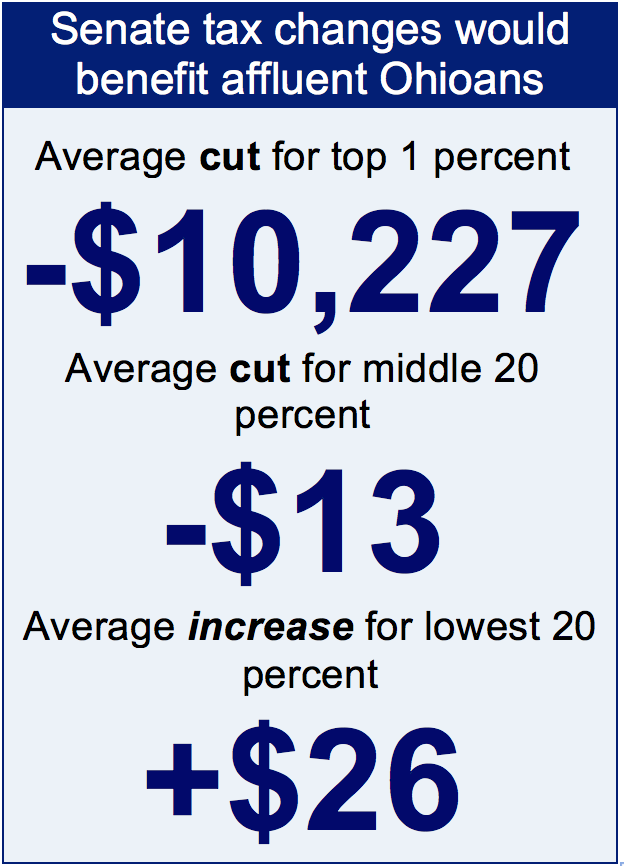 The top 1 percent of Ohioans, who made at least $388,000 last year, would receive half of the income-tax cuts under a tax plan proposed as part of the Senate budget bill. State budget legislation approved by the Ohio House of Representatives and proposed by the Senate majority both would slant Ohio’s tax system further in favor of the state’s wealthiest and against low- and middle-income residents. However, the Senate bill introduced this week would provide a bigger windfall to the most affluent and produce an even bigger shift than the House plan.

Those are some of the key findings of an analysis done for Policy Matters Ohio by the Institute on Taxation and Economic Policy, a Washington, D.C.-based research group with a sophisticated model of the tax system.

The top 1 percent of Ohioans on average would see an annual tax cut of $10,227, even with other tax increases in the plan. The middle fifth of taxpayers, who made between $37,000 and $58,000 last year, would see an average cut of just $13. The bottom fifth of taxpayers, who made less than $20,000 last year, would see an average increase of $26. The Senate Finance Committee is considering the budget bill, including the tax changes, and the full Senate is expected to vote on it next week.

“We should maintain and bolster the state’s progressive income tax, not weaken it as the Senate plan would do,” said Zach Schiller, Policy Matters Ohio research director. “That would allow us to invest in needed public services and rebalance the tax system in favor of most Ohioans.”

Policy Matters Ohio is a nonprofit, nonpartisan state policy research institute with offices in Cleveland and Columbus. The Institute on Taxation and Economic Policy (ITEP) is a non-profit, non-partisan research organization based in Washington, D.C. that works on federal, state, and local tax policy issues. ITEP measures the distributional consequences of federal and state tax laws and proposed changes in them, both nationally and on a state-by-state basis.