A plan to restore solvency to the system is needed. However, House Bill 394 is an unbalanced plan that relies only on cuts to worker benefits and eligibility to improve the system’s finances. For workers, the plan cuts benefit weeks to some of the lowest levels in the nation. For employers, it appears that the plan actually cuts taxes, when experts have made clear that the biggest problem with the financing of Ohio’s system is an inadequate tax base (see Wayne Vroman, The Urban Institute, “Solvency Recommendations for Ohio,” July 10, 2008).

Policy Matters Ohio will study the bill closely. However, it’s clear the legislation would push Ohio well outside the mainstream by creating new hurdles for unemployed workers before they can qualify for benefits. As it is, fewer Ohioans are receiving unemployment compensation than any year in more than 40 years. For decades, a smaller share of Ohio unemployed workers has received UC than jobless workers do nationally; in the year ended in June, 23 percent of Ohio’s unemployed received benefits, a share that ranked 36th in the nation.

Yet the bill would require workers to have wages in at least three quarters of the year (in addition to Ohio’s long-time standard of 20 weeks), something that no other state mandates. The bill greatly expands the definition of “just-cause” firing, meaning it will be difficult for many workers to show that they are entitled to benefits. The bill would keep workers from getting benefits if they violated the terms of their employee handbook, regardless of employee notice or whether those work rules are serious or silly.

The bill would repeal bipartisan legislation, approved unanimously by both houses of the Ohio General Assembly in 2007, that eliminated Ohio’s practice of deducting Social Security payments from any UC benefits a person might otherwise be eligible for. Just this week, the governor and legislators in Illinois agreed to wipe out such an offset there. Thus, Ohio would be the only state in the nation with this practice.

One key feature of the bill would reduce the maximum number of weeks of benefits a claimant could receive from the current 26, creating a sliding scale of between 12 and 20 weeks depending on the unemployment rate. Today, it would mean a maximum of 12 weeks of benefits. Twelve weeks is the lowest number of weeks available in the nation, matched in just two other states. Policy Matters Ohio has calculated that over the past decade, according to the formula in the bill, the maximum number of weeks would have been just 15.5. The table below shows how many weeks of benefits would have been available for each six-month period over the past decade: 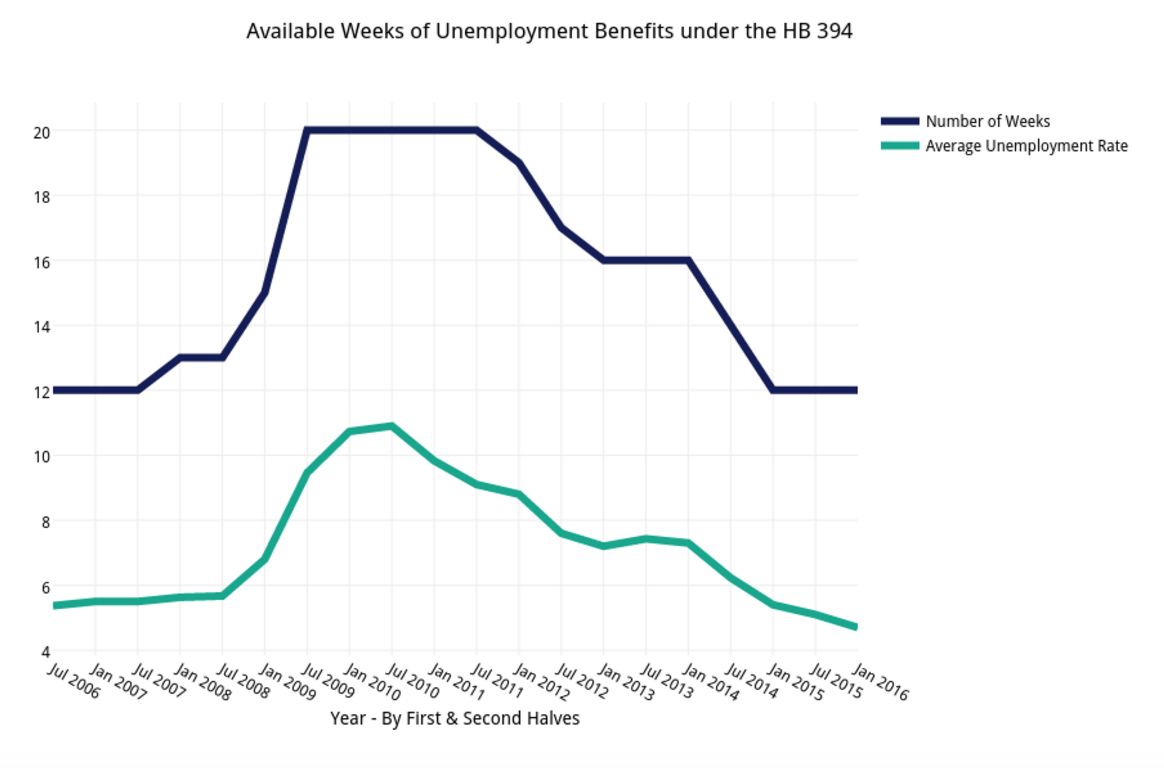 This means that many Ohioans would be cut off from unemployment benefits and hard-pressed to pay basic necessities. That would hurt the Ohio economy, which has benefited during hard times from the stimulus that UC benefits provide. During the recession in 2009, 247,778 Ohioans exhausted their 26 weeks of regular benefits. Unemployment keeps mortgages paid and food on the table in times of economic downturn, boosting spending and helping the economy. This bill jeopardizes that.

“Slashing worker benefits and lowering employer taxes is not a balanced solvency plan,” said Zach Schiller, Policy Matters Ohio research director. “This overhaul needs an overhaul if it is to meet the needs of the Ohio economy, as well as Ohio workers and employers.”

offices in Cleveland and Columbus.