"The GED Has Become a Barricade Instead of a Launching Pad"

"The GED Has Become a Barricade Instead of a Launching Pad"

There's been much discussion over the current state and future of GED testing in Ohio, especially since Scene contributor Dan McGraw highlighted the problem in late 2014. At the time, he wrote: "In the United States, according to the GED Testing Service, 401,388 people earned a GED in 2012, and about 540,000 in 2013. This year, according to the latest numbers obtained by Scene, only about 55,000 have passed nationally. That is a 90-percent drop off from last year."

This past week, Policy Matters Ohio published a report that underscores how critical this problem is becoming in Ohio in just the past few years. The report goes in-depth into the history and current context behind the GED's woefully falling numbers.

The number of people attempting and passing the GED has plummeted. The Ohio economy is tough on low-wage workers with limited formal education. Without a high school diploma, it is virtually impossible to get a family-supporting job. But the GED has become a barricade, blocking Ohio workers from career goals, instead of a launching pad. 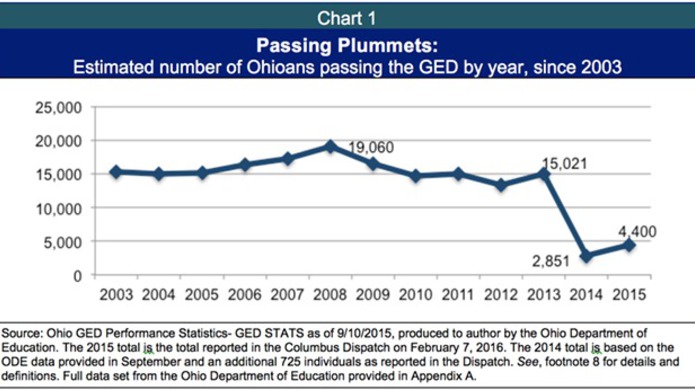 The GED service recently announced that it would lower the passing score from 150 to 145, and that any and all states may begin using that revised metric. Ohio will begin use the new score March 1, and will apply those scores to the past two years of tests. (The above chart reflects those retroactively applied passing scores.) The problem has not been adequately addressed, PMO argues.

According to The Columbus Dispatch, this means an additional 1,425 Ohioans who took the GED over the past two years will now receive their degree. The Department of Education will recalculate the totals after March, but based on the Dispatch article and the totals provided by the department of education, we estimate that 7,251 people have now passed the GED in the two years since the changes were implemented. This is cold comfort given that more than 15,000 Ohioans passed the test in the year prior to the testing changes. Even with the scoring change and the full year estimate provided in the Dispatch for 2015, the number passing the GED is down more than 70 percent from the state’s pre-2014, five-year average.