Joe Shrodek is a retired Ohio steelworker, a union man and a lifelong Democrat.

But he's bucking the party and the union to vote for Republican Donald Trump.

"I think I've got a better shot with 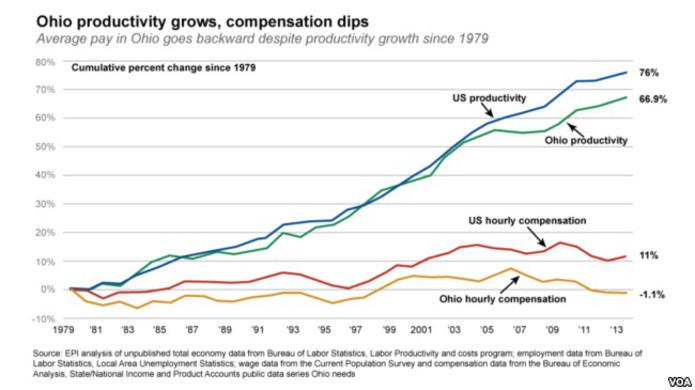 This election season has been dominated by the feelings of voters who say they are fed up with "politics as usual." A drive through Warren, Ohio, where Shrodek used to work, helps explain why.

It's an eye-opening tour of boarded-up homes, closed restaurants and shuttered factories. Huge, empty fields occupy the space where industrial plants had spent the past century churning out everything from steel to light bulbs.

What's left behind is a town in trouble. On a quiet residential street a couple blocks off the main square, Shrodek said, "You come by at night and there's all kinds of hookers in this area."

On a similar street across town: "Here's where all the dopers are." Heroin addiction is a growing problem in Warren. Shrodek says he knows families whose children have overdosed.

Ohio workers used to earn more than the national average when manufacturing ruled the state. But while wages have stagnated nationwide since the 1970s, they have declined in Ohio as factories have closed. In Warren, over the last 40 years, about one-third of residents moved away. Among those who stayed, about one-third of them live in poverty.

"I think there is a lot of economic anxiety in Ohio, and in the rest of the country," said Amy Hanauer, director of Policy Matters Ohio, a nonprofit policy research organization. "And I think you're probably seeing that reflected in some of the politics that we're seeing."

"You keep hearing politicians say, 'We got your back. We're gonna do this for you. We're gonna do that,' " said Mark Gargano, another lifelong Democrat who retired from a tire factory that has since gone bankrupt. "And then after they get in office, nothing happens."

He, too, has defected from the Democratic Party to back Trump.

"He's like a wrecking ball," Gargano said. "Or, he's more of a hammer. Hopefully, he can cut through some of the red tape."

"I understand why people feel that way," said Karen Nussbaum, executive director of the AFL-CIO-affiliated labor group Working America. "When we talk to folks, they say they're fed up. They don't see a recession that's been recovering in their family. They don't see politicians that are responsive to their needs. They're frustrated. They don't know where to turn. So when they see a guy who says, 'I'm your guy to blow the whole thing up,' it's appealing."

But blowing up the system won't solve the problems, she said. And the Trump campaign's racial and anti-immigrant overtones concern her.

Trump has proposed deporting undocumented immigrants, building a wall with Mexico and banning Muslim immigration until officials "can figure out what the hell is going on." African-American protesters have been violently attacked at Trump rallies, including an assault Thursday.

"When he speaks about building a wall, it resonates with me," Gargano said. "Our borders, our language and culture is a very important thing. When my grandparents came here, they wanted to be Americans. They learned the language. They no longer spoke Italian in the home. They said, 'We're Americans now. We're going to speak English.' Now, [immigrants] come over, and I don't know what they're doing. They're trying to just get welfare benefits."

But Gargano said Trump is not racist. "He's worked with all people," he said. "He's had Hispanics, he's probably had Chinese, Americans, everybody. If the guy really was racist, he wouldn't be as successful as he is."

Working America representatives who canvassed working-class neighborhoods around Ohio in December and January found more support for Trump than for any other candidate. But most were undecided, and Nussbaum said roughly a third of Trump supporters would reconsider when offered a different view of what's behind their community's problems.

"It's not your neighbors you should be blaming," Nussbaum said. "It's the people who actually have power — corporate lobbyists, Wall Street — that are just driving our communities into the ground for profit."

Hanauer says nonunion whites often vote Republican, but "working-class whites who are in unions vote overwhelmingly for the Democratic candidate." She does not expect most union members will vote for Trump.

Tuesday's vote will offer a glimpse of how strong Trump's appeal is to Ohio's working-class voters.