House health care bill is a setback for women’s health

House health care bill is a setback for women’s health

By helping low-income people purchase insurance and those living in or near poverty to access health care through Medicaid, The Affordable Care Act (ACA) has been a remarkable demonstration of what public policy can do for public health and the well-being of Americans. The protections it offers to women prevent inequity in insurance coverage and assure that health care coverage includes essentials like preventative care, contraception and maternity benefits.

The recently-passed House health care plan (“American Health Care Act” or AHCA) rolls this back. It would have devastating consequences for the nearly 40 million women across the country who rely on Medicaid.[1] 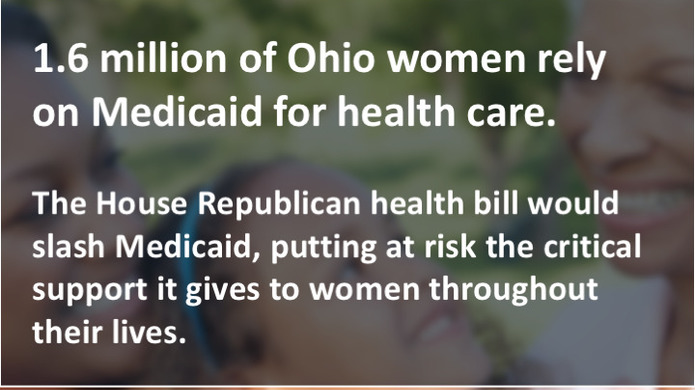 As the debate shifts to the Senate, policymakers should reject any health bill that causes people to lose coverage, caps or cuts Medicaid, ends the Medicaid expansion, or takes away critical protections. Failing to meet these standards would harm millions of women and their families.

The House-passed bill, which President Trump supports, would slash Medicaid by more than $800 billion over 10 years by effectively eliminating the Affordable Care Act’s expansion of Medicaid to low-income adults and imposing a “per capita cap” on the program.

Women would bear a disproportionate impact of these cuts, not only because they are the majority of Medicaid beneficiaries, but they are also the primary utilizers of family planning and maternity care benefits. They are also much more likely to use Medicaid’s long-term services.

Medicaid provides health care for nearly half of all pregnant women, supporting them through their pregnancies and ensuring that their babies have a healthy start. In fact, Medicaid financed 52 percent of births in Ohio in 2014.[2]

In addition, the Affordable Care Act’s Medicaid expansion covered many women without children, and offered continuous coverage to new mothers who had qualified while pregnant but would not have qualified after their pregnancy. Ending the expansion would take these benefits away for millions.

Eliminating the ACA’s Medicaid expansion would jeopardize coverage for more than 300,000 women in Ohio who gained coverage as a result of the expansion.

The House-passed bill also includes several provisions that are especially harmful to women with private insurance. It would allow states to opt out of the ACA’s Essential Health Benefits standard, effectively allowing insurers to charge women much more than men by leaving many women without affordable access — or any access — to maternity coverage.[3]

It would give states the option of allowing insurers to charge far higher premiums to people who are pregnant, have had a C-section, or were treated for injuries resulting from domestic violence.

Changes to essential benefits – Under the Affordable Care Act, insurance plans were required to cover the following essential benefits: Ambulatory care (outpatient services), emergency care, hospitalization (inpatient services), maternity and newborn care, mental health, preventative care and chronic disease management, rehabilitation and habilitation services, laboratory services, prescription drugs and dental and vision services for children. Insurance would not be required to cover these services under the House health plan. States would define what services, if any, are mandatory to cover.

Changes to women’s health care: One of those essential services is maternity and newborn care. Prior to the ACA, 62 percent of plans on the individual market did not include these services. Maternity care coverage cost extra. Now, we may expect to see women paying more for this basic health care need if they are of childbearing age depending upon what state they live in.

The House plan places expanded restrictions on abortion coverage for both public and private insurance plans which could potentially dismantle insurance coverage for abortion.

Changes to community ratings: In the most basic sense, community rating means insurers cannot charge people different premiums except for adjustments based on age and cost-of-living adjustments in different locations. The ACA prohibited insurers from charging people higher premiums for coverage based on their health, a practice referred to as “medical underwriting.” The House health plan allows states to waive rules prohibiting disparate treatment of pre-existing conditions. There are two stipulations:

Changes to the Medicaid program: Medicaid is crucial to maternal and child health care in the United States, supporting more than half of the births in Ohio.

These three measures, taken together, are considered important health interventions for developing nations. Ohio has Third World levels of infant mortality in some neighborhoods, so employing strategies used in developing nations makes sense.[10] However, the House health bill eliminates the Medicaid expansion. It freezes enrollment in 2020, and allows no new entrants. The Medicaid population is not static: it serves the working poor, which means that people enter the program when they lose a job and leave as income rises. Because it serves as a safety net to a changing population, the freeze will rather quickly end the expansion.

This would cause great harm in Ohio. The 2009 task force report on Ohio’s high infant mortality rate highlighted the relationship between the health of mothers and the health of babies: “Infant deaths are at the heart of our inadequate health care system. Why should any infant die because their mother had no health insurance before she became pregnant, had little access to treat anemia, depression, asthma, diabetes or hypertension, or to safely space her last pregnancy? Infant deaths are preventable if we realign our priorities and our financial incentives.”[11]

The House health bill not only ends the Medicaid expansion, but it breaks the flexible financial partnership between state and local government in providing health coverage through Medicaid. It would change from a mandatory program based on eligibility to a block grant or per-capita cap program, designed to dwindle – like the TANF program – over time.[12] As funds become tight in states like Ohio, with an aging population, state lawmakers will be forced to cut eligibility and benefits. In Ohio, two-thirds of elders in poverty are women; seven of 10 in Medicaid-supported nursing home or community based services are women nationally.[13] The need for and cost of care for elderly and disabled people is higher than for others. State lawmakers may seek to more aggressively curtail coverage for the most expensive groups.

As the debate shifts to the Senate, policymakers should reject any health bill that causes people to lose coverage, caps or cuts Medicaid, ends the Medicaid expansion, or takes away critical protections. Failing to meet these standards would harm millions of women and their families.

Medicaid Works for Women — But Proposed Cuts Would Have Harsh, Disproportionate Impact,”