Keeping ‘em honest: Last December, Ohio passed a bill that created a special committee to review the state’s more than $9 billion worth of tax breaks. As our Zach Schiller pointed out Monday, committee nominations were due in April. As of Monday, state legislative leaders still hadn’t nominated a single member. The day after we issued our statement, Ohio Senate President Larry Obhof made his nominations. Two days later, Speaker of the House Cliff Rosenberger followed suit. Now let’s hope they eliminate some of those unnecessary tax giveaways! 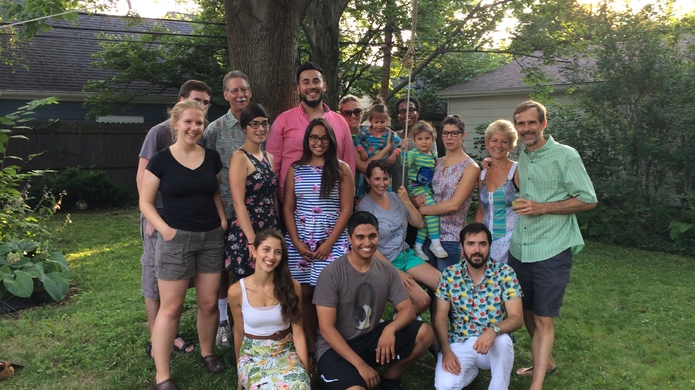 The Policy Matters Crew takes a break from zombie hunting for a backyward cookout.

To kill a zombie: It appeared we avoided the catastrophic consequences of the Senate plan to repeal and replace the Affordable Care Act, but this pesky piece of legislation just won’t stay dead. In separate op-eds, Caitlin Johnson and Wendy Patton explained why we must put the final nail in the bill’s coffin. Our Cynthia Connolly detailed the deadly implications for Native Americans. There is still time to kill the zombie bill. Ohio Senator Rob Portman is a key vote for Senate Majority leader Mitch McConnell, which means he will face lots of pressure from President Trump and GOP leadership as the Senate attempts to bring the legislation back to life. Make calls, send emails, and attend rallies!

Budget bust: The Trump tax plan would give away $4.8 trillion in tax cuts mostly to the wealthiest Americans and big corporations over the next 10 years. Meanwhile, the House released a budget that slashes crucial services like SNAP (formerly known as food stamps) and Medicaid. To make matters worse, the House plan creates a way for Republicans to force the bill through the legislative process without bipartisan support. Our national partners, Institute on Taxation and Economic Policy and Center on Budget and Policy Priorities, found that under these federal budget changes, most Ohioans will suffer while only a very small group will benefit. In a guest blog, Jeffrey M. Reutter of the Center for Lake Erie Area Research explains how Trump’s budget could reverse decades of progress for Ohio’s great lake.

Jobs grow, but pay still too low: In a new report, our Michael Shields found that raising Ohio’s minimum wage from $8.15 to $15 an hour by 2025 would give 1.8 million people a raise, reduce inequality, and lower poverty. Forty-one percent of women and 28 percent of men would get a raise, and over 700,000 Ohio children would see their family income rise. We also had some good news regarding Ohio’s job growth: we added 11,500 jobs last month, the strongest gain since last July. But we still lag the nation in growth and unemployment actually increased in June. Ohio still has more work to do to shore up the economy – and tax cuts are not the solution.