Fighting for Ohio’s working people: With threats to workers looming at both the state and national levels, Policy Matters went on the offensive this week and released “A new way forward: 10 ways to support Ohio’s working people.” Rampant inequality is a policy choice. We can choose policies that lift up all working people, not just the 1 percent. Researchers Hannah Halbert and Michael Shields joined ProgressOhio for a press conference to unveil our recommendations. 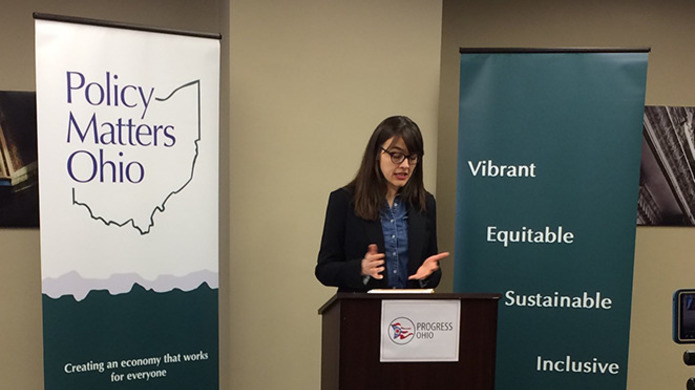 Medicaid works, work requirements don’t: Work requirements aren’t pro-worker at all. In fact, they could contribute to some low-wage workers losing health coverage. But the state of Ohio, with the Trump Administration’s encouragement, is pursuing a waiver to impose work requirements on people who received health insurance through Medicaid expansion. Wendy Patton’s fact sheet explains what’s wrong with this idea, including the fact that most adult Medicaid expansion participants who aren’t elderly or disabled, already work. Before the state submits the proposal to the federal government, the public has 30 days to submit comments or attend public hearings. Let Universal Health Care Action Network Ohio know which hearing you’ll be attending.

State to Uber: Pay up: Zach Schiller found ride-hailing company Uber hasn’t been paying state and local sales tax, even though the Ohio Department of Taxation says it must. The ODT assessed the company $1.35 million in such taxes for the third quarter of 2015, plus more than $240,000 in interest and penalties. Uber is appealing the case. Meanwhile, Ohio’s transit agencies face major losses due to state cuts to the sales tax base they use to levy a local tax.

Watching the watchdogs: Since it was created, the Consumer Financial Protection Bureau has worked hard to protect Americans’ pocketbooks – until President Trump’s director of Office of Management and Budget took the helm from Rich Cordray. Now the CFPB is defending the interests of financial institutions rather than the consumers it was formed to protect, writes Kalitha Williams.

Hands off: President Trump’s budget proposal, released this week, would slash important programs that expand opportunity, ensure access to the basics, and give Americans pathways to the middle class. Get our latest research and analysis about the Trump tax bill and how proposed cuts could hurt people in your community. The president came to Ohio to sell us a bill of goods about his tax overhaul, and Amy Hanauer wasn’t having any of it. Your members of congress will be home on recess next week. Call their local offices and tell them “hands off” programs that take care of kids, seniors, people with disabilities and more.

Welcome Rob! Now for some happy news. Our Columbus office just got more spontaneous and entertaining as improv comedian Rob Moore joined our team as a researcher. We’re thrilled to have him. Learn more about Rob’s impressive resume here.

In the community: Amy joined U.S. Rep Marcia Fudge for a Trump tax bill town hall in Akron. She also participated in a panel on criminal justice reform at Cleveland State University and met with the Cleveland Bridge Builders Class of 2018. Wendy Joined Dayton Mayor Nan Whaley to discuss the Trump Tax plan. 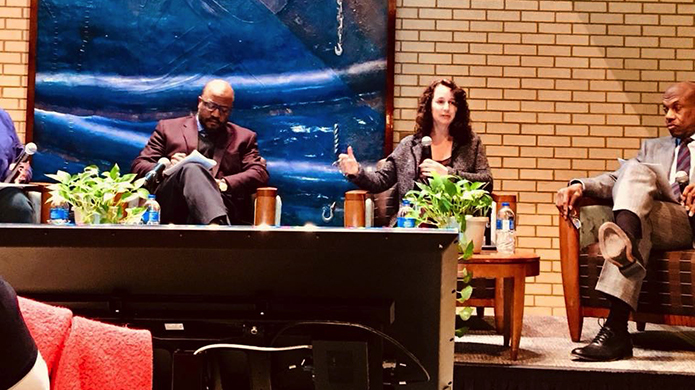 Coming up: Wendy will join the City Club of the Mahoning Valley at Suzie’s Dogs and Brews in February 19, in Youngstown at 6:30pm. She’ll be breaking down the Trump tax bill. Register now for the Manufacturing a Better-Paying Ohio Summit we’re cosponsoring with The Century Foundation next month.