Stepping up and speaking out: News from Policy Matters

Stepping up and speaking out: News from Policy Matters

Work requirements still don’t work: Ohio is asking the federal government for permission to impose work requirements on the 700,000 people who receive health insurance through Medicaid expansion. Wendy Patton testified twice against the proposal. She said work requirements aren’t necessary, don’t make sense in today’s low-wage job market, put an unfair burden on patients and could be unconstitutional. You can speak out, too. Fill out this short survey from UHCAN Ohio and they will submit your feedback to the state. The public comment period ends March 18. 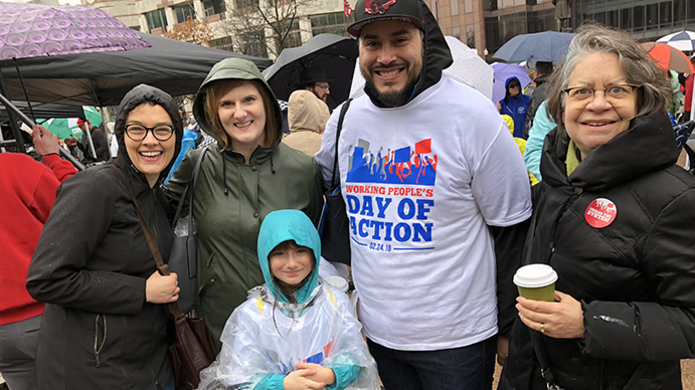 Hannah Halbert, Daniel Ortiz and his family and Wendy Patton braved the rain for the Working People's Day of Action.

Another blow to public schools: Ohio lawmakers voted this week to conform to part of the new federal tax law that gives a tax break to wealthy Americans who send their kids to private school. Ohio’s 529 college savings plans are projected to cost the state more than $20 million a year. Victoria Jackson warned members of the House Ways and Means committee that expanding them to include K-12 tuition would mean fewer resources for public schools.

Tax Break Takes: Ohio gives out more than $9 billion a year in tax breaks. Many of these are unnecessary, outdated or unproductive. As the legislature’s new Tax Expenditure Review Committee prepares to review them all, we are launching a new series, “Tax Break Takes.” We’ll be analyzing select tax breaks to see if the benefits (if any) outweigh the costs. We began with the vendor discount, which rewards retailers for collecting sales tax and paying it on time. Wendy writes that it costs Ohio $60 million a year without offering a whole lot in return. Stay tuned for more of our hot takes.

In the community: Last week, Daniel Ortiz, Hannah Halbert and Wendy joined allies from across the state for the Working People’s Day of Action in Columbus. If you missed it, catch their waterlogged video dispatches here, here and here. Daniel also spoke to Emerald Cities’ E-Contractor Academy class about community benefits agreements and policy advocacy.

Coming up: Amy Hanauer will participate in a panel discussion on renters, landlords and neighbors, Wednesday, March 7 at 7 p.m., at Shaker Heights Main Library. It’s part of the One Community Reads program that encouraged Cuyahoga County residents to read Matthew Desmond’s book “Evicted.” The program culminates with a talk from Desmond at the Ohio Theater Thursday, March 15 7-8:30 p.m. If you can't get tickets or aren't able to make the trip downtown, go to the Shaker Main Library and watch a live stream of his presentation. Just make sure to register first.

Register now for Manufacturing a Better-Paying Ohio, an amazing summit we’re cosponsoring with The Century Foundation on March 12. It features the release of our in-depth analysis about the state of Ohio manufacturing, and a keynote address from one of America's most vocal manufacturing advocates, U.S. Senator Sherrod Brown.

Our allies and partners at the Ohio Organizing Collaborative are working to free people from addiction and incarceration by passing a statewide ballot initiative. To learn about the policy, campaign needs, and how to get involved, attend the Cuyahoga County campaign launch meeting on Tuesday, March 13th from 6:30 p.m. to 8:30 p.m. at Forest Hill Presbyterian Church in Cleveland Heights.