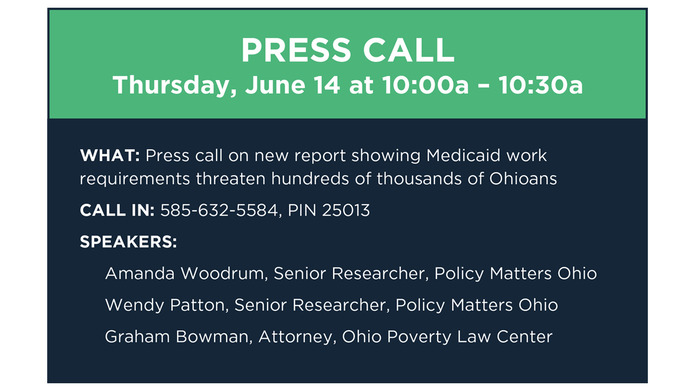 Proposed changes to Ohio's Medicaid expansion will threaten health care access for hundreds of thousands of Ohioans. Estimates by the Kasich administration understate the severity of the cuts, which disproportionately affect people of color in urban centers across the state.

Policy Matters Ohio senior researcher Amanda Woodrum finds more than 300,000 Ohioans will be at risk of losing coverage – over a quarter of a million more than the Kasich administration claims.

Governor Kasich recently requested federal permission to impose a new requirement that would allow the state to drop Medicaid coverage for people unable to get at least 80 hours of work per month or a coveted spot participating in a county-run work experience program unless they can prove they are exempt from the requirement.

Woodrum found many of the exemptions to be largely irrelevant, confusing and/or subject to varying interpretations by state and county administrators. “Many Medicaid patients, particularly people with chronic conditions, will not be able to prove they should be exempted,” said Woodrum.

Residents of 26 counties will be exempted entirely from the new requirements, similar to the federal food aid program. “In those counties, which are predominantly rural white communities, Medicaid patients would be protected,” said Woodrum.

Along with her statewide analysis, Woodrum's report includes fact sheets illustrating the potential effects of the proposed cuts on Medicaid users in each of Ohio's 88 counties.

“Come November, Ohio will be electing a new Governor. Voters need to tell Ohio’s next Governor to withdraw these new requirements,” said Woodrum.