It’s been a rough couple of weeks for progressives in Ohio and across the nation. But let’s not hang our heads. This edition of eNews features nine things we can do—right now—to help build a world we all want to live in. As everyone’s favorite Wobbly songwriter Joe Hill put it, “Don’t waste any time mourning — Organize!”

We can join and support unions: Though the Supreme Court’s decision in Janus v. AFSCME is a transparent attempt to divide public sector workers, it doesn’t prevent them from organizing. Though corporate-sponsored union-busting legislation has private sector unions in the crosshairs, it can’t stop us from joining together to take back our workplaces. We know that unions make for safer, better jobs, especially for women and people of color. Now’s the time to rally around our unions, public and private.

We can resist new Medicaid regulations: Looking for ways to stand up for Medicaid expansion? Then check out our website’s new Medicaid landing page, where we’ve packaged Amanda Woodrum’s deep dive into the effects of proposed cuts to expansion; Wendy Patton’s exposé of the federal government’s misleading justifications for Medicaid rule changes; factsheets that calculate the number of Medicaid enrollees at risk of losing their coverage in each Ohio county; and lots more. The page is a primer for understanding the threats posed by Governor Kasich’s proposed changes, and a toolkit for resisting them.

We can make it easy for our officials to condemn Medicaid cuts: As the Cleveland office’s resident attorney, Amanda Woodrum is making it simple for county and municipal governments to declare opposition to new Medicaid regulations. Her two-page template lays out language for an official resolution, “urg[ing] the federal Centers for Medicare and Medicaid Services to disapprove the State of Ohio’s Medicaid waiver request that would force harmful cuts to Medicaid Expansion enrollment and increase the rate of uninsured in Ohio.” You can find the relevant data in your county’s factsheet. Just enter the information into the fillable PDF and send the ready-made resolution to your county legislator or city council.

We can turn taxes right-side up: As a share of their income, Ohio’s wealthiest 1 percent pay around half what people pay at the bottom of the income scale. Experts call it an upside-down model. Zach and Wendy have authored a plan to turn our taxes right-side up. Help us get our plan in front of the people who need to see it most: gubernatorial candidates Rich Cordray and Mike DeWine. Tweet this link to @RichCordray and @MikeDeWine, and let them know Ohio’s income tax system needs an overhaul.

We can (and did!) pressure our Senators to do what’s right: Though the U.S. House of Representatives passed a Farm Bill that included shameful cuts to SNAP, the Senate passed a far better, bipartisan bill that defends SNAP and helps food banks. Now the two houses need to agree on a compromise bill. Keep up the pressure on Senators Brown and Portman—both of whom supported the Senate bill—and call, email, and Tweet your representative to show your support for a Farm Bill that won’t let Ohioans go hungry. 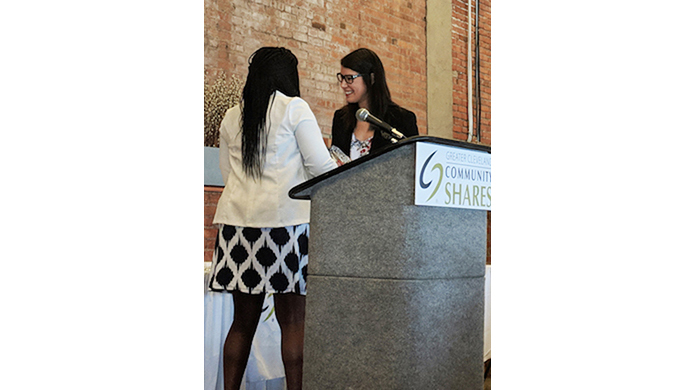 We can celebrate inspiring activists: Policy Matters board members, staff, and interns turned out in support of Cynthia Connolly this week, as she received the 2018 Rising Activist award from Greater Cleveland Community Shares. The award honored Cynthia’s work as our development director, and her advocacy for Cleveland’s Native American community. In her acceptance speech, Cynthia showed she’s ready for what’s next: “There is so much work yet to be done, and I’m just getting started.” Email Cynthia to congratulate her!

We can invest in our kids: High-quality child care and early childhood education make for happy, healthy kids who grow up to be compassionate, productive adults. Rob Moore’s new report explains how, and lays out policies that would expand access. Among them is a recommendation that Ohio Department of Job & Family Services straighten out their flawed formula for reimbursement. Let’s make sure they get the message. Tweet @OhioJFS with a link to Rob’s report, and urge them to take his advice so more families can afford the kind of child care that brightens everyone’s future.

We can talk about our important work: Hannah Halbert helmed another edition of our summer roadshow in support of A Winning Economic Agenda for Ohio’s Working Families, our collaboration with Innovation Ohio Education Fund. Rob spoke about access to high-quality child care at an event for the Women’s Fund of Central Ohio, and led breakout groups at a forum for the Health Policy Institute of Ohio. Daniel Ortiz took part in a community roundtable about public transit, and a press conference by Latinx leaders responding to ICE’s massive workplace deportation raids on Ohio businesses. Mike Shields participated in a panel at Ohio Asian American / Pacific Islander Legislation Day, discussing immigrants’ rights on the job. We’re always grateful for your outreach too! Please talk up Policy Matters’ work during your July 4th barbecues, family picnics, camping trips, rallies and marches!

And we can form a union!