Exemptions worth $5.5 billion a year should not be rubber-stamped

More than four months after its first report was due under state law, the Ohio General Assembly’s Tax Expenditure Review Committee (TERC) finally is scheduled to meet Tuesday and vote on whether to extend, modify, repeal or schedule for further review 15 sales-tax breaks worth an estimated $5.5 billion a year to state and local government. Because of the weak and perfunctory review it did of these tax breaks, the committee should defer making recommendations on whether to continue them, and schedule them for further review.

Eight of the 15 sales-tax exemptions the committee reviewed received no proponent testimony (See Table 1 below). No one appeared to support them and explain why they are necessary. Altogether, these tax breaks cost the state of Ohio $1.4 billion a year and another $300 million-plus to counties and transit agencies that levy their own piggyback sales taxes. 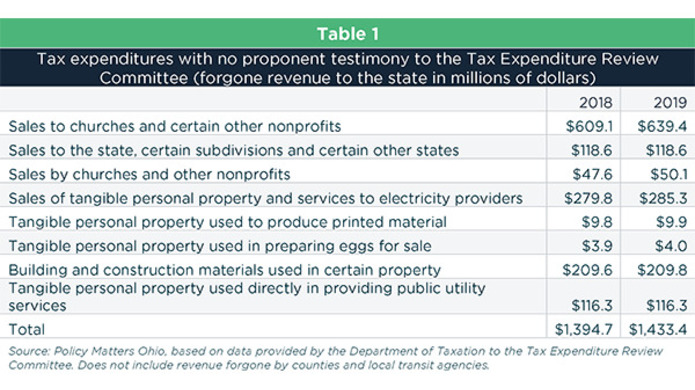 “The committee has not yet done a rigorous review in part because the legislature didn’t provide resources and staff to do so,” said Wendy Patton, senior project director at Policy Matters Ohio. “It would be fiscally irresponsible to recommend unmodified continuation of tax breaks that received no proponent testimony. They may have merit but even their beneficiaries haven’t said so. Some have changed and grown over time, and we don’t know if they meet their original purpose.”

The 2016 law establishing the committee called for it to review each tax break. Over eight years, it is charged with reviewing all 129 in the tax code, which cost the state more than $9 billion a year in forgone revenue. Earlier this year, the committee conducted hearings on 15 sales-tax breaks that cost the state $4.4 billion annually and cost county government and transit agencies $1.1 billion. This is just a subset of overall tax breaks.

As Policy Matters noted in a June report and a more recent release, implementation of the tax expenditure review has been inadequate. None of the items received the kind of review permitted by the law, as factors set out in the statute for possible consideration went unused. The purpose of several tax expenditures was not known or clarified. The committee’s report, which will be included as an appendix in Governor-elect Mike DeWine’s executive budget next year, also is overdue; under the law creating the review process, the first report was due July 1.

“The state has cut funding for local governments and underfunded early childhood education, public transit and other services. Yet tax expenditures – which have every bit as much impact on the state budget as state spending – have continued to grow and proliferate,” Patton said. “The Tax Expenditure Review Committee can help make sure that spending through the tax code is tightly controlled and in the interest of the state. It should hire staff to undertake a real analysis of the 15 sales-tax breaks and others, and perform the job it was created to do.”