Saturday stats: You get what you pay for

Saturday stats: You get what you pay for

39,601: Using economic modeling software, Victoria Jackson found that if state policy makers reform our tax code to make it more effective and fair, Ohio could raise $2.6 billion in revenue. If lawmakers invest that money in public services like transit and education, we could add another 36,601 jobs and build a stronger economy. This week, Wendy Patton outlined a slew of smart ways we could use new revenue in the 2020-2021 state budget. They include:

If you haven’t gotten your fill of state budget analysis after reading those, check out Amy Hanauer’s appearance on “Face the State with Scott Light” earlier this month where she appeared alongside House Speaker Larry Householder and former State Senator Charleta Tavares.

And if that’s STILL not enough, Wendy and Hannah Halbert will be featured presenters at “How Things Work at the Statehouse 3: Budget & Policy Basics” 2-4 p.m., March 3 at the Columbus Metropolitan Library - Northern Lights Branch.

$150 million: Policy Matters joined forces with 40 organizations to form the MOVE Ohio coalition, which is pushing for increased state support for public transit and other sustainable modes of transportation. In an open letter published in the Columbus Underground, the coalition asked Governor Mike DeWine to invest $150 million a year in public transit, as well as safe infrastructure for walking, bicycling, and getting around if you have disabilities.

More than 1 in 2: That’s how many staff have been let go from the Ohio Civil Rights Commission since 2000 – we now have just 80 people to investigate complaints in a state of 11 million.

27 percent: Meanwhile, Wendy found that with mounting racial tension and the rise of the #MeToo Movement, complaints to the commission increased by 27 percent between 2016 and 2018.

2 million Ohioans would get a raise if lawmakers increase the state’s minimum wage to $15 an hour by 2023, according to Michael Shields. He analyzed the impact of a bill sponsored by Rep. Brigid Kelly (D-Cincinnati) and found the increase would improve equity by raising wages for 42 percent of working women and 54 percent of black workers. 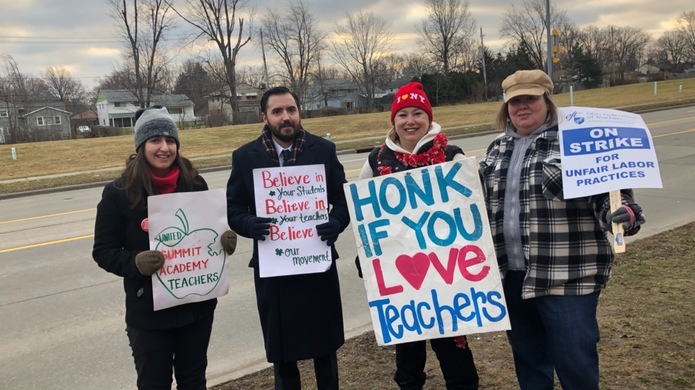 5: Today marks the fifth day of the Summit Academy teachers strike in Parma. The teachers, who are members of the Ohio Federation of Teachers (shout out to OFT President and Policy Matters board member Melissa Cropper!), are seeking improved health and safety conditions; manageable class sizes and caseloads, planning periods; and more reasonable standards. Mike joined the teachers on the picket line this week. You can also show your support.