Ohio should invest in public infrastructure to build a strong economy

Ohio should invest in public infrastructure to build a strong economy

Right now, in Columbus, legislators are debating the merits of increasing Ohio’s gas tax to invest more in Ohio’s roads, bridges and public transit systems. In the long term, better roads and public transit strengthen Ohio’s economy and help workers be more productive by making it easier for them to get to their jobs. These investments also create good construction-related jobs in the short term.

In most states across the nation, investment in public infrastructure remains at lower levels than in 2000, even as the economy rebounds from the last two recessions. The share of Ohio’s economy generated by state and local capital spending fell by .5 percent between 2002 and 2016, from a share of 2.21 percent of Ohio’s 2002 gross domestic product to 1.72 percent in 2016, according to a new report released today by the Center on Budget and Policy Priorities (CBPP). Making matters worse, federal capital spending has also been on the decline, going from 1 percent to 0.5 percent of national GDP over the last 35 years. The federal gas tax was last increased in 1992, more 25 years ago. 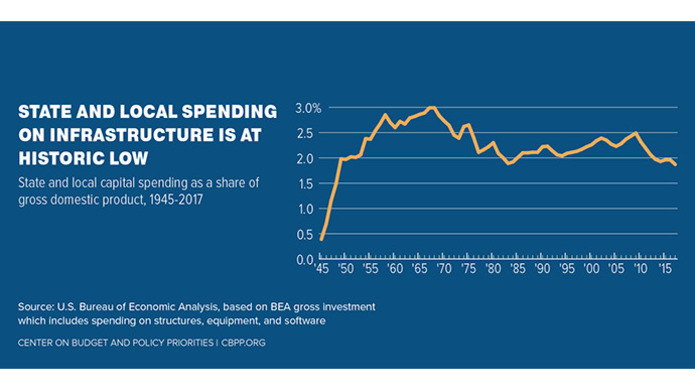 With a $1 billion hole in the state transportation budget, Ohio’s bridges and roads are also in dire straits. Eighteen percent of Ohio’s nearly 123,000 miles of public roads are in poor condition, and it’s costing each Ohio driver $545 per year, according to the American Society of Civil Engineer’s Infrastructure Report Card.

Governor Mike DeWine has called for an 18-cent per gallon increase in the gas tax to maintain and repair Ohio’s infrastructure. The Ohio House just passed a transportation bill that increases the gas tax by 10.7 cents per gallon and sets aside $100 million for public transportation. The measures are now being considered in the Ohio Senate.

“Ohio’s underinvestment in public infrastructure shows in the state of our roads, bridges and public transit systems,” said Policy Matters Senior Researcher Amanda Woodrum. “We have to raise the gas tax to maintain our roads. We also need to set aside some of that revenue for public transit. That way we can reduce wear and tear on our roads while helping people get to work and cutting our carbon emissions.”

Many states struggle to repair and expand their transportation infrastructure because they have failed to increase gasoline or other fuel taxes in recent years. Ohio has not increased its gas tax since 2005 and is one of 18 states that have gone more than a decade, according to the Institute on Taxation and Economic Policy.

In its most recent report card on the condition of America’s infrastructure, the American Society of Civil Engineers gave U.S. infrastructure a D+ or “poor” rating. The engineers noted that Ohio has serious challenges beyond transportation. For example, 412 of Ohio’s 1,407 dams are high-hazard potential. Ohio has $14.58 billion in wastewater infrastructure needs over 20 years. The state’s schools have an estimated $683 million gap in school capital expenditures.

The time is right for Ohio to invest in infrastructure because such investments will improve the economy, both now and in the future; and opportunities to finance these investments abound. What’s more, well-designed investments in parks, libraries, schools, and better roads and public transit can improve Ohio quality of life and advance equity by ensuring that people – no matter their skin color, income level, or neighborhood - have access to building blocks of thriving communities like good roads, schools, and hospitals.

“Every state needs infrastructure improvements in order to maintain functioning public services and build a strong economy. But rather than investing in infrastructure, many states have cut taxes or offered corporate subsidies in a misguided approach to boosting economic growth,” said Elizabeth McNichol, Senior Fellow at the Center on Budget and Policy Priorities and author of the report. “This pattern of neglect by states has serious consequences for the nation’s growth and quality of life as roads crumble, school buildings become obsolete, and outdated facilities jeopardize public health.”