6/10: Six of Ohio’s 10 most common jobs pay less than $27,000 a year – a wage so low, a family of three wouldn’t be able to afford food without help. Hannah Halbert compiled the latest data which shows that people are barely making ends meet in communities across Ohio. See how your area stacks up with our local fact sheets. 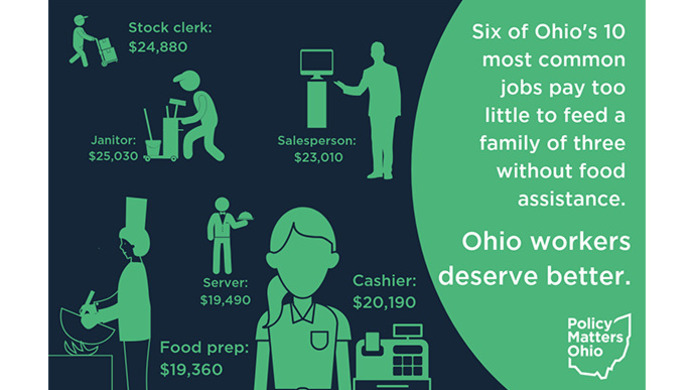 10: Something is deeply wrong with the economy when people who work fulltime can’t afford to feed their families. That’s why we updated our 10-point policy platform to support Ohio’s working people. Our recommendations include paid family leave, raising the minimum wage and protecting working people’s right to speak up together.

$100,000: The House budget proposal makes some encouraging reforms, like shrinking the LLC Loophole by applying the tax break to the first $100,000 in business income rather than the first $250,000 it does now. It also closes several loopholes, like the motion picture tax credit and tax break for co-owners of private jets. We’re happy about that, but would like to see the savings invested in a refundable EITC or public transit, instead of turned into tax cuts that often don’t help those that struggle the most.

$1.4 billion: That’s how much Ohio’s local governments have lost every year from 2006 to 2018. Wendy Patton’s budget bite details some improvements in Governor DeWine’s budget, but says lawmakers needs to increase support for cities, counties, villages and townships, which deliver most of the services Ohioans use.

$9.86: That’s the average hourly rate for child care workers in Ohio -- pretty low pay for people we entrust with nurturing and protecting our children. Even worse, child care is too expensive for many Ohio families. Only two states make it more difficult for families to qualify for public child care programs. In his budget bite, Will Petrik says Ohio can fix both of these problems with increased state investment.

1.2 million Ohio children are covered by Medicaid, the state’s largest health insurance program. It also covers more than half the state’s births. In another budget bite, Wendy shows how Governor DeWine’s budget increases Medicaid spending, especially for programs that help kids. But spending caps keep Ohio from making all the investments we need to keep everyone healthy.

$4 million a year is the amount Ohio needs to expand and improve education and training programs for people who use SNAP, or federal food aid. Hannah’s budget bite explains that the best workforce development programs empower participants instead of forcing them to work in low-wage jobs.

3: On Earth Day, Ben Stein wrote that Ohio’s kids are being harmed by climate change, especially rising temperatures in our cites. We can enact three policies today that would help: 1. Pass a refundable Earned Income Tax Credit to help low-income families pay for things that help them deal with the heat, like air conditioners. 2 Reduce carbon emissions from cars by investing in the state’s public transit network. 3. Protect Ohio’s clean energy standards that save consumers money and spur growth in wind and solar industries.

$500 million: Each year Ohioans pay over $500 million in excessive fees to payday and car-title lenders. The Consumer Financial Protection Bureau rule to regulate the industry is supposed to go into effect in August 2019. Unfortunately, the Trump Administration’s CFPB director wants to stop it. If you represent an organization, consider joining this sign-on letter insisting that the rule be implemented without delay.

May 17: Get a policy update from Amy Hanauer while supporting University Settlement, a great organization run by former board member, Earl Pike. Amy will be the keynote speaker at the Slavic Village Ecumenical Breakfast, 8-9:30 a.m. Breakfast will be provided.

May 18: VoteRunLead, a national nonpartisan organization that trains women to run for office, is holding a daylong training called Run As You Are in Columbus.

May 20th: The date when Victoria Jackson will appear on a panel discussing college affordability at a City Club panel in Warren. Don’t miss it.