Saturday stats: New faces on the board

Saturday stats: New faces on the board

2: This past week we welcomed two fantastic new additions to our board: Dr. Tracy Nájera and Teleangé Thomas. 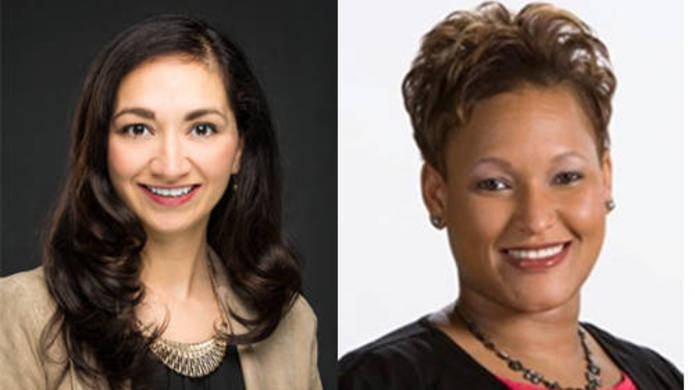 Tracy is the executive director of Children’s Defense Fund-Ohio. She previously worked for Ohio’s Office of Budget & Management, Battelle for Kids, and Education First Consulting. Tracy holds a master’s in public administration from the Glenn College of Public Affairs and a doctorate in education administration from the College of Education and Human Ecology at The Ohio State University. She resides in Columbus with her husband Israel and their two children Riley and Tati.

Teleangé is the director of the Foundation Center Midwest. Previously, she served as the health program director for the Sisters of Charity Foundation of Cleveland. Teleangé earned a bachelor’s of business management and entrepreneurial studies from Case Western Reserve University. She is on the boards of directors for Health Policy Institute of Ohio, Green City Growers, The Conservancy of Cuyahoga Valley National Park and the Cleveland Public Library Foundation. She’s also a fellow of the Robert Wood Johnson Foundation and a community impact volunteer of the United Way of Greater Cleveland.

379,200: That’s the number of Ohio’s lowest income tax filers who will get a cash infusion under our plan to reform the state Earned Income Tax Credit. We want to add a 10% refundable option to Ohio’s newly expanded credit. Ben Stein shows just how much this could help Ohio’s working families.

$720 million: The Cupp-Patterson plan to reform how Ohio funds public schools recommends Ohio’s K-12 schools receive $720 million more to support for basic classroom instruction and other core school functions. In her Budget Bite, Victoria Jackson says Ohio’s schools need at least that much, but it has to be distributed equitably.

125,000: If the so called “Healthy Ohio Plan” moves forward, 125,000 people could lose health coverage through Medicaid. Rep. Jim Butler’s proposal would charge some of the state’s poorest residents monthly premiums in order to receive coverage. If they can’t pay or navigate the complicated HOP requirements, they might not get coverage for important services like ambulance rides, addiction treatment or even oxygen, according to Wendy Patton.

117,000: In 2017, nearly 117,000 Ohio workers were hurt or fell ill from exposure to workplace hazards; and 174 were killed on the job. This week, legislators just set a trap for undocumented workers in a last minute amendment to the Bureau of Workers Compensation budget bill, House Bill 80. Under the change - which just passed the House – workers’ comp filers must disclose their immigration status. If undocumented workers lie, they’re denied coverage. If they disclose, the Bureau is directed to call ICE. If this makes it through the Senate and becomes law, it will reward unscrupulous businesses that seek out undocumented workers so they can cut corners on safety and put all their workers at risk.

< .7%: Even with our $40 million tax credit, Ohio has a less than .7% share of the market for film production. That’s one of the reasons Wendy Patton’s Budget Bite gives the tax break two thumbs down.

9,196: Ohio lawmakers enacted the LLC Loophole in 2013. Between then and 2018, there were 9,196 fewer first-time hires at new Ohio businesses. It’s just another reason Zach Schiller says if it’s not totally scrapped, the Senate should rein in the LLC Loophole as the House did and also limit it to those who actually run businesses and hire workers.

June 13-16: Amy Hanauer and Michael Shields are both speaking at the Labor and Employment Relations Association conference in Cleveland, Mike about manufacturing and Amy about service workers. Registration is still open.

June 18-20: Mike is also speaking on another panel for the Ohio Alliance to End Sexual Violence Communities in Action conference. He will discuss how wage equity and worker protections can help prevent sexual violence. You can register here.