LLC loophole should be trimmed

LLC loophole should be trimmed

General Assembly should reject proposal to omit that from the budget

Six years after the original creation of a tax break for Ohio business owners, the data shows it has failed to bring more jobs, increase the number of new businesses or help Ohio’s economy. That’s why the Ohio General Assembly should ignore Governor DeWine’s proposal to take changes in the $1 billion LLC loophole out of the state budget. 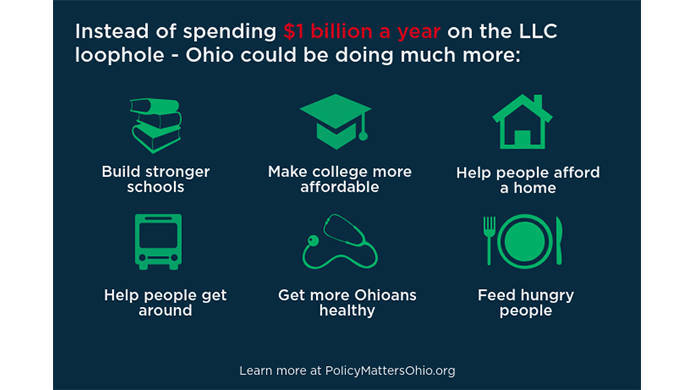 “Both the Ohio House and Senate agreed that the special 3% income-tax rate paid on business income over $250,000 should be eliminated,” said Zach Schiller, Policy Matters Ohio research director. Current law provides that business owners pay just a 3% rate on income over that amount, compared to the nearly 5% rate that is otherwise paid on such income.

“That reform on its own would generate more than $180 million a year, according to analysis by the Institute on Taxation and Economic Policy, affecting less than half of one percent of Ohio taxpayers,” Schiller said. “That would affect only the wealthiest Ohioans, who have benefitted in an outsized way from recent tax cuts. The budget bill should include this change.” In addition, the General Assembly should support the House plan to reduce the deduction to $100,000 from the current $250,000, he said. That would have no impact on 86% of those who claim it.

This tax break also is poorly targeted. Most people with business income don’t employ anyone. Data from tax returns show that as of Tax Year 2014, only 9.5% of U.S. taxpayers owning a bona fide small business and reporting business income had employees other than the owner.

Eliminating the special 3% rate and limiting the deduction to $100,000 would save $528 million a year, according to the Legislative Service Commission. This budget has been welcomed for new investment in children’s services, school wrap-around services, and clean water, but funding for basic public services has been eroded by years of cuts and inflation. Funds from reducing the LLC loophole would be better invested in a refundable Earned Income Tax Credit, which would do more to aid the poorest residents than tax cuts in the budget bills, with enough left over to increase funding for needed investments. These include overhauling K-12 school funding, making college affordable, increasing eligibility for public child care aid, and rebuilding revenue sharing with local governments.