Saturday stats: Which side are you on?

Saturday stats: Which side are you on?

1st: Join us at our first conference in many years on August 23! Along with allies at The Legal Aid Society of Cleveland, Neighborhood Connections, Cincinnati Interfaith Workers Center and the Central Ohio Worker Center, we’ll be talking about critical challenges faced by working people who earn low wages and how workers’ centers can help. Register for “Which Side Are You On: The Cleveland Work & Wages Conference” today!

2: Two criminal justice reform bills are moving through Ohio’s General Assembly. Both make positive steps towards pragmatic reforms that will decrease our prison population and provide treatment to people struggling with addiction, according to Piet van Lier. Policymakers can and should still go further by making sure reforms incorporate the 5 Rs we’ve recommended.

If you want to help make criminal justice reform a reality in Ohio, our partners in the fight, the Ohio ACLU, are hosting several crucial events next week. On July 18, they’ll be discussing their Blueprint for Smart Justice in Cleveland and Columbus. On July 20, they will host a daylong advocacy training in Columbus. Register for that by July 15.

$528 million: That’s how much Ohio would save a year if lawmakers eliminate the special 3% income-tax rate paid on business income over $250,000. Zach Schiller says policymakers should scrap the LLC loophole altogether. The House budget proposed shrinking it. At the very least, we’d like to see their plan remain in Ohio’s final 2020-2021 state budget. We also reached out to members of the conference committee, House and Senate leadership, and key members of the DeWine administration to let them know what we think the state budget should include. (Spoiler alert: We want more investment in good stuff like education, lead abatement and child care... and fewer tax cuts and breaks for the wealthy and special interests).

Two-for-one: For every new rule that includes words such as “must” or “shall,” two existing rules could be nixed from the Ohio Administrative Code, thanks to a cockamamie idea that found its way into the Senate’s budget proposal. Zach explains why the provision is careless, arbitrary and not based on any proven theory of good governance. Even George Carlin would be embarrassed. 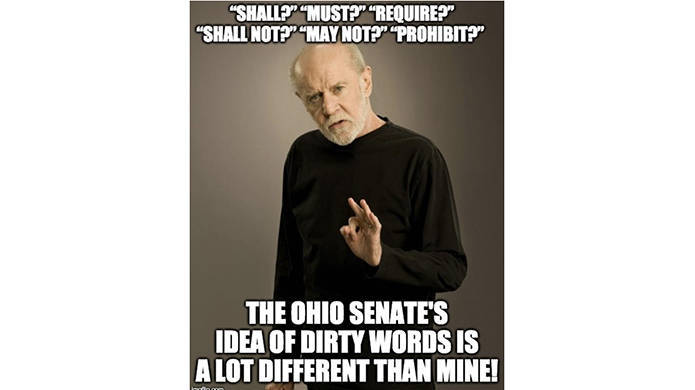 Another 1st: We put out our first health note, which gives policymakers a framework to analyze the health impacts of proposed legislation. Amanda Woodrum, Ben Stein and intern Emma Schubert began by analyzing the workers compensation budget. We show that some things, like provisions to increase coverage for first-responders with PTSD, will make Ohioans healthier. While others, like a provision that would deter undocumented workers from filing claims, would definitely not.

60,000: That’s how many Hoosiers lost health care under the so-called “Healthy Indiana Plan.” The plan charged premiums for some of the state’s lowest-income residents to get health care through Medicaid. Ohio lawmakers are considering a similar one, here. Wendy Patton explains why that is an awful idea.

On that note, the Ohio Department of Medicaid is about to make changes in its contracts with insurance companies. Our partner, UHCAN Ohio, wants to make sure Medicaid hears what is important to you. Use this survey to let the Medicaid department know what needs to be fixed and what works.

151: It’s been more than 150 years since the start of Reconstruction – the period following the Civil War when the nation most seriously grappled with two centuries of a Southern economy based on slavery. Between 1865 and 1877, former slaves throughout the South were elected to public office, but most historians say after federal troops pulled out of the South, Reconstruction failed. Founding Policy Matters board member and former history teacher Michael Charney wants to make sure students learn the full history about Reconstruction. Join him and support the Zinn Education Project's Teach Reconstruction campaign. In his Charney Challenge, he will match all donations up to $10,000. That means your donation will be doubled.

5: Five dynamic panelists will speak to the amazing cohort of college students who are participating in Summer on the Cuyahoga - and to you too, if you’d like to join our Executive Director Amy Hanauer and other Cleveland leaders as they discuss urban poverty, gentrification, and how to challenge the status quo in Cleveland. “Opportunity for All: A Tale of Two Clevelands” will be held at 6 p.m. on Monday July 15 at the Tri-C Main Campus on 2900 Community College Ave in Cleveland, Room 107. Free and open to all!