Today, for the first time in over a decade, the U.S. House of Representatives voted to increase the federal minimum wage to $15 an hour, index the wage to inflation, and to eliminate the sub-minimum wage paid to workers who earn tips, workers under age 20, and workers with disabilities. The Act more than doubles the current federal minimum of $7.25 and is a significant increase of the tipped-minimum that stands $2.13 an hour. The bill passed with 233 votes, including three Republicans. In a statement, Policy Matters Ohio Project Director Hannah Halbert praises this development and notes how raising the wage would impact Ohio workers. 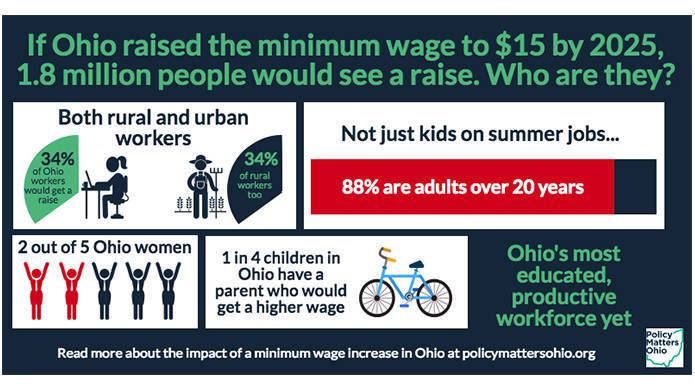 “Everyone who works for a living should earn enough to cover the basics. In Ohio, too many jobs pay too little. Our research shows that six of Ohio’s 10 most common jobs pay so little a working person with a family of three would need and qualify for food assistance. An Ohio worker must earn $15.73 an hour to afford even a modest two-bedroom apartment. Even though it’s higher than the federal minimum wage, Ohio’s $8.55 minimum wage is too low.

“The Ohio minimum wage is worth 28 percent less now than it was in 1968. Legislative inaction let inflation strip its value until Ohio voters stepped in to raise the state minimum in 2006. It’s still not enough. The Raise the Wage Act would restore the lost value and eliminate pay inequities between tipped workers, young workers, and workers with disabilities.

“Increasing the minimum wage to $15 by 2025 would raise the wage for more than 1.8 million Ohio workers. Parents of more than 700,000 children would get a raise. The change would also lift black workers’ wages to be closer to their white counterparts. In 2017, median earnings for black workers were $4.60 an hour less than white workers, compared to a $1.65 an hour difference in 1979.

“Low wages are political, not economic problems. Ohio workers created record wealth last year, just as they’ve done every year since 2010. Policies and rules have kept wages low, and the wealthiest have captured most of that growth. Between 1973 and 2015, 86 percent of new income growth went to the top 1 percent. The vote today moves us one step closer to restoring balance and building an economy that works for all. We can change the rules so everyone shares in the nation’s prosperity. It is now up to the U.S. Senate to act.”