The 2020-2021 state budget passed in July takes steps to expand college access for low-income students, but it falls short of what’s needed to meet Ohio’s college attainment goal, according to new analysis from Policy Matters Ohio.

Ohio’s Department of Higher Education set the goal that by 2025, 65% of Ohioans between 25 and 64 should have a degree, certificate, or other postsecondary credential of value. Only 44.1% of Ohioans hit the mark in 2016. Policy Matters Researcher Piet van Lier said lack of state support for higher education is a big reason why.

“Getting postsecondary education or training helps people develop the skills to meet today’s challenges, follow their dreams and contribute to their communities,” he said. “It makes sense that Ohio wants more people to continue their education. What doesn’t make sense is our lawmakers’ unwillingness to properly fund higher education.” 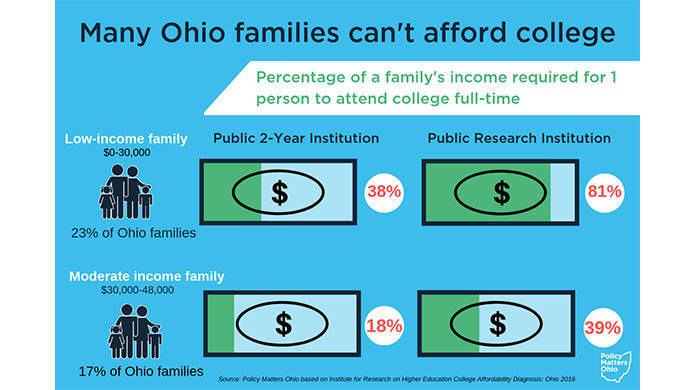 Our state has some of the most expensive public colleges in the nation, ranking 45th worst for college affordability. Sixty-four percent of Ohio’s class of 2016 with bachelor’s degrees had student debt, with an average of $30,351 each. In 2019, Ohio students paid an average tuition of $9,801 at main campuses, $5,951 at branch campuses and $4,497 at community colleges, all above the national average. On average, families earning $30,000 or less would need to spend 81% of their income for one year of the net price of a public university (tuition, fees, room and board minus financial aid) and 38% for community college, according to the Institute for Research on Higher Education.

Lawmakers increased funding for the Ohio College Opportunity Grant (OCOG), the state’s need-based-aid program, by $73 million over the last budget, up 31% when inflation is taken into account. In 2010, lawmakers set a goal of investing $250 million a year in need-based aid, but the closest Ohio came was in 2008-2009. Even with this budget’s increase, OCOG funding will go up to only $148 million in 2021.

Lawmakers have also baked into OCOG structural problems that exclude many lower-income students. For example, students are only eligible if tuition and general fees exceed resources available from their families and the federal Pell Grant, and OCOG doesn’t pay for cost-of-living and other related expenses. This structure excludes more than 110,000 students attending Ohio community colleges and regional campuses, and severely limits grants for students at Ohio’s only public historically black university, Central State. At the same time, legislators allow OCOG to pay for private, for-profit institutions, which often leave students with more debt and don’t improve their career prospects.

“Increasing funding for need-based aid is a welcome victory for the Ohio students who struggle to afford college, but we need lawmakers to address the structural issues with the program and increase support for higher education overall,” van Lier said. “Ohio has the resources. Our lawmakers just choose to spend them on the wealthy and special interests in the form of tax breaks and tax cuts. Instead, they can choose to clean up our tax code and use the revenue to make sure all Ohioans who want to attend college can afford it.”