Today, the U.S. Department of Labor (DOL) published its final overtime rule. The rule weakens an Obama-era rule which would have restored overtime protections to many salaried workers and boosted the pay of about 370,000 Ohio workers. Ohio workers have lost more than $85 million in wages since President Trump abandoned the rule in 2017. The new rule will leave behind an estimate 230,000 Ohio workers. 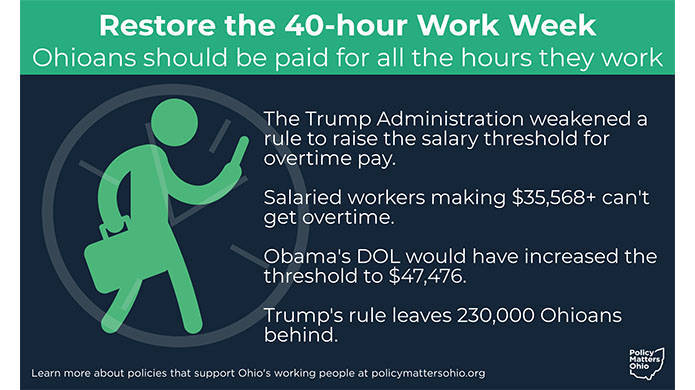 “Currently, many categories of salaried workers are automatically eligible for overtime pay only if they earn less than $23,660 – an amount that would keep a family of four in poverty. This means that many salaried managers at restaurants and retail stores can work well over 40 hours a week and receive no pay for those extra hours. Policymakers set the overtime threshold so low that in 2016, just 7% of salaried working Ohioans were covered. In 1975 more than 60% of full-time salaried workers earned below the overtime threshold. In 2016, the Department of Labor revised the salary threshold to $47,476, still substantially below what the threshold would have been had it kept up with inflation. This move would have restored protections to about 33% of the salaried workforce, helping modestly paid and middle-class workers.

The Trump administration’s rule raises the overtime threshold to just $35,568 a year. The change is estimated to cover about 150,000 Ohio workers but falls far short of what is needed. A salaried worker earning $35,568 is earning 138% of the poverty threshold for a family of four, which in 2019 is set at $25,750. Because the Trump rule is not indexed the worker will continue to fall behind as inflation erodes the rule. This change will leave behind 230,000 workers who would have been protected under the 2016 rule, according to estimates from the Economic Policy Institute.

Too many workers in Ohio earn poverty level wages. Six of the 10 most common jobs in the state pay so little a typical worker supporting a family of three would need and qualify for food assistance. Ohio policymakers have allowed worker protections to erode. State lawmakers can stand up for working Ohioans and go beyond federal overtime rules. Pennsylvania’s governor proposed modernizing that state’s overtime protections. By 2022, workers paid salaries up to $47,892 would be protected. Ohio should do the same.”