Cost of living increases keep workers from getting pay cut

Next month, Ohio’s minimum wage gets a 15-cent bump to $8.70 to keep pace with rising prices. The change will benefit 84,000 of Ohio’s lowest paid working people, two-thirds of whom are adults. Yet even with the inflation increase, Ohio’s minimum wage is less than the wage in neighboring states Michigan and West Virginia, and far below the phased-in $15 minimum wage laws passed in six states and Washington, D.C. Ahead of the adjustment, Michael Shields, Policy Matters Ohio researcher, issued the following statement:

“The impending adjustment reflects the wisdom of Ohio voters, who tied the minimum wage to inflation when they passed a raise by ballot initiative in 2006. That change safeguards the state’s poorest workers against further losses. But it shouldn’t make Ohio proud of how our wage stacks up today. By indexing the wage to inflation, voters prevented it from losing value over time, but the 2006 raise was not high enough to recover ground already lost in the decades before that change. The minimum wage in Ohio and nationally peaked in 1968 at just over $12 an hour in today’s dollars. 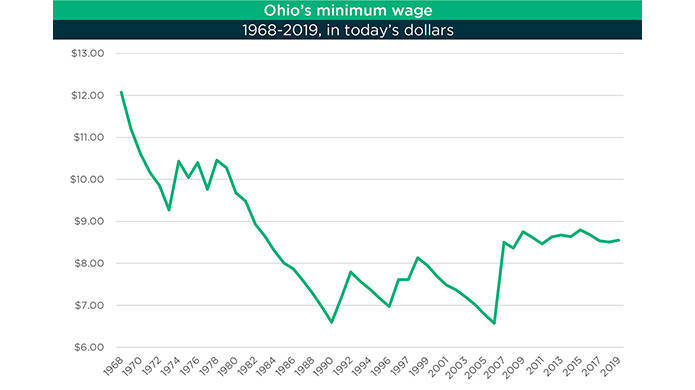 “Since then, Ohio’s economy has grown 88 percent, while the real minimum wage fell by 28 percent. Not only have low-wage workers shared none of the growth, their wages have fallen while workers became more skilled and the state became wealthier than ever before.

“According to the Economic Policy Institute, most of the people whose wages will hold steady because of next month’s adjustment work in some of Ohio’s most common jobs, including restaurants (49%) and retail (16.3%). Today six of Ohio’s 10 most common jobs pay too little support a family of three without food aid -- up from four of 10 in year 2000. The $8.70 minimum wage falls $3,000 short of the poverty level for a family of three.

“Tipped workers’ earnings will adjust from $4.30 to $4.35 starting Jan. 1. Under the law, tipped workers are entitled to the same minimum wage as other workers, but their employers can claim credit for their tips and offset up to half their wage. In reality, this policy makes it easier for employers to steal from their employees who work for tips. Eight states and DC have eliminated the sub-minimum wage for tipped workers.

“Next month’s adjustment is a vital safeguard to protect Ohio’s poorest workers from losing pay to inflation. But in real terms, Ohio’s minimum wage workers haven’t had a raise in thirteen years. It’s time to pass a living minimum wage for all Ohio workers.”