20: That’s how many years Amy Hanauer has spent running Policy Matters Ohio after she helped found the organization in 2000. You can hear her reflect on her tenure on WCPN’s “The Sound of Ideas.” In January, she will begin her new role as Executive Director of Washington D.C.-based Institute on Taxation and Economic Policy and its advocacy arm Citizens for Tax Justice. From Day 1, Amy has been the brain, the heart and the guts of Policy Matters Ohio. She’s irreplaceable. The politicos in DC won’t know what hit ‘em—but they’ll hear us cheering all the way from Ohio. 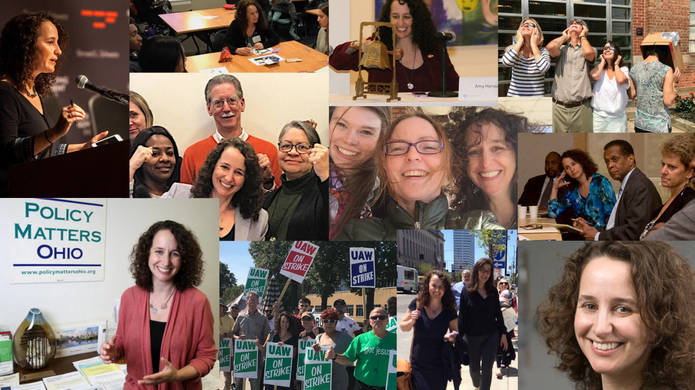 Amy in action, through the years.

6,700: Ohio employers added 6,700 jobs in November. But over the last 12 months, Ohio jobs have grown just 0.4% compared to the national average of 1.4%. Hannah Halbert has all the latest jobs data with this month’s JobWatch.

3: Under a new Trump administration rule, only three Ohio counties – Jefferson, Monroe and Noble – will be eligible for a waiver from onerous restrictions on federal food aid or SNAP. SNAP requires certain participants spend at least 20 hours a week working or participating in job training or a work-related activity regardless of whether there are enough jobs available in their community to supply those hours. States can ask the federal government to waive the mandate, however, for counties with high levels of unemployment. Before the change, 42 of Ohio’s 88 counties qualified for the waiver, but under the new Trump rule, the eligibility bar is much harder to meet. That means thousands more Ohioans could go hungry, Will Petrik wrote in the Ohio Capital Journal. The truth is that cutting off people’s access to food will not help anyone get or keep a job.

84,000: That’s how many Ohioans will be protected from inflation thanks to the state’s annual minimum wage adjustment. Because voters chose to raise the minimum wage in 2006 and peg the new wage to inflation, the value of Ohio’s wage floor won’t erode as the cost of living rises. But as Mike Shields explained in a statement, an op-ed and on “All Sides with Ann Fisher,” Ohio’s minimum wage doesn’t pay enough for most working people to make ends meet.

40+: The Ohio Legislature is considering more than 40 new state tax breaks on top of the 134 already in existence that currently cost the state nearly $10 billion. Not only do these tax expenditures siphon revenue from important things like public education, they skew the tax code to favor the wealthy and powerful. Wendy Patton says lawmakers could bring more balance to the tax code with a sales tax credit targeted at people who actually need the help.

462: As Ohio lawmakers consider moving away from a punitive approach to criminal justice, they can draw inspiration from Oklahoma, Colleen Gravens wrote. Oklahoma recently took a bold step toward reforming its justice system by commuting the sentences of 462 incarcerated people. Ohio Senate Bill 3 proposes to reclassify some minor drug possession felonies as misdemeanors. That’s a good first step, as long as it doesn’t include language that takes Ohio backwards by increasing penalties for other minor offenses. Ohio legislators can follow in Oklahoma’s footsteps by making sure reclassification applies retroactively. That way, Ohioans with previous low-level drug convictions won’t face as many barriers to good jobs, safe housing and a higher education.