Saturday Stats: Let's get to work

Saturday Stats: Let's get to work

268: Ohio Senate Bill 3 would open up opportunities for people who have struggled with addiction. Michael Shields found the bill would remove 268 legal barriers to jobs and professional licensing that hold people back even after they’ve paid their debt to society. However, the bill only applies to future convictions, so it won’t help the Black and brown communities targeted during the War on Drugs. By addressing that flaw, legislators would improve the lives of thousands of Ohioans.

0.5%: That’s Ohio’s 2019 job growth rate, the slowest we’ve had in a decade. As Hannah Halbert notes in this month’s JobWatch, it’s a preliminary number subject to revision in March. Those meager gains happened almost entirely in the service sector, and often in jobs that don’t pay enough to get by.

$35 million: Ohio’s EdChoice voucher program has already cost public schools $35 million more this year than last. That’s because lawmakers allow families to use taxpayer dollars to pay for private school tuition, even families who never planned to use public school and live in districts where many students are doing well. With 1,200 schools in more than 400 districts expected to lose money to EdChoice next year, Piet van Lier proposed some urgently needed fixes to the program in a Cleveland.com op-ed.

3: The future of the Dayton Daily News hangs in the balance as its new owner, Apollo Global Management, seeks a buyer that will continue publishing the paper seven days a week. In the Ohio Capital Journal, Caitlin Johnson describes the pitfalls of the growing dominance of hedge funds in Ohio’s newspaper industry – and policy solutions to protect local news.

$13: Ohioans for Raising the Wage, a coalition of community groups and organized labor, filed this week to ask Ohio voters to raise the state minimum wage to $13 an hour by 2025. We’ve shown that today’s minimum wage of $8.70 leaves a full-time worker with a family of three $3,000 below the poverty line of $21,330.

20,000: The Trump Administration is stiffening reporting requirements for people who receive federal food assistance. That change could take food off the tables of 20,000 Ohioans. Will Petrik told NBC 4 Columbus that reporting requirements move food policy in the wrong direction, stripping a basic need from families and communities.

23-24: Do you know a young person interested in state policy? The Ohio Legislative Service Commission will accept 23 or 24 recent college graduates as fellows. Learn how to apply here.

20: You didn’t think we’d let Amy get off that easy, did you? After 20 years, we’ve developed a lot of good material. Don’t miss her roast! Email Cynthia Connolly to reserve your seats! 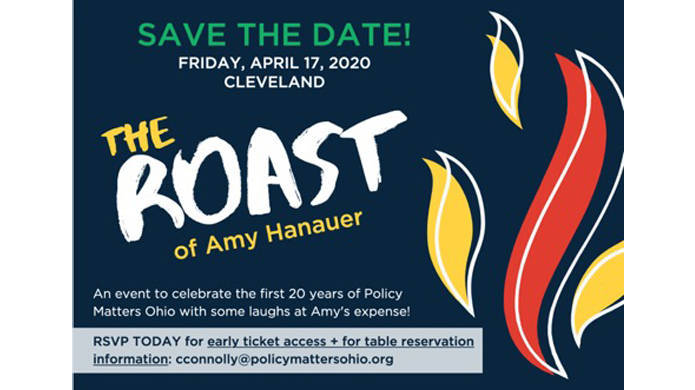