With revenue about to plunge, Cleveland Council should delay vote on Sherwin-Williams incentive package

With revenue about to plunge, Cleveland Council should delay vote on Sherwin-Williams incentive package

Cleveland City Council is scheduled to vote tonight on an incentive package for Sherwin-Williams Co. worth a reported $100 million. While some of the incentives are dependent on jobs being created and a rise in property values, they include up to $13.5 million for a construction grant. Policy Matters Ohio released the following statement from Research Director Zach Schiller:

“As the COVID-19 crisis is forcing employers to lay off workers, the city of Cleveland will lose a large portion of its main source of revenue, the payroll tax. The prospect of an economic downturn makes it unwise for city council to approve the incentives at this time. State policymakers should also think twice about supporting the deal, and in particular subsidizing the move of the company’s research facilities from Warrensville Heights and Cleveland to Brecksville.

“Cleveland’s finances alone should be reason enough to delay the deal. There are others. Last year, according to a filing with the Securities & Exchange Commission, Sherwin-Willaims paid CEO John G. Morikis $14.85 million, 349 times the amount paid to the company’s median employee. The city of Cleveland should not provide $100 million to a company that reinforces inequality.

“During 2018 and the first three quarters of 2019, the paint company bought back nearly $1.2 billion of its stock. While such buybacks may lift a company’s stock price, they do nothing to add productive capacity that will lead to our shared prosperity. Indeed, large-scale buybacks weren’t allowed until the 1980s. They certainly don’t suggest that Sherwin-Williams needs these incentives. In fact, on March 19, Sherwin-Williams issued a statement reaffirming its financial guidance to investors.

“Recent research shows that most such incentives are unnecessary. ‘Study after study demonstrates that when states and cities give out tax breaks to companies looking to relocate or expand, they typically get very limited bang for their bucks, if any,’ said a recent article in Governing magazine. Timothy J. Bartik of the W.E. Upjohn Institute reviewed 30 studies on such incentives and found at least 75% of the time – and possibly up to 98% of the time – the firms would have made the same decision without the incentives. Sherwin-Williams paid $49 million for land for its new headquarters in downtown Cleveland, before city and state incentives had been approved.

“Separate from Cleveland’s pending incentives, Brecksville last week approved its own set of incentives to bring a new Sherwin-Williams research center there. It will replace existing research facilities in Warrensville Heights and Cleveland. Income tax from the 400 Warrensville Heights employees accounts for $1.2 million out of the city’s annual budget of about $20 million.

“So far, the the Ohio Development Services Agency and JobsOhio, the state’s privatized economic developement entity, have stayed mum on the size of the incentives they will provide Sherwin-Williams. However, it seems clear they will be sizeable. This will subsidize an overwhelmingly white, relatively affluent community over a largely black, much poorer community. With thousands of businesses shuttered and 139,000 Ohioans applying for unemployment benefits in the first five days of last week alone, the state will soon experience a major downdraft in revenues. In this environment, it’s especially inappropriate for the state to subsidize the move from Warrensville Heights and Cleveland to Brecksville. 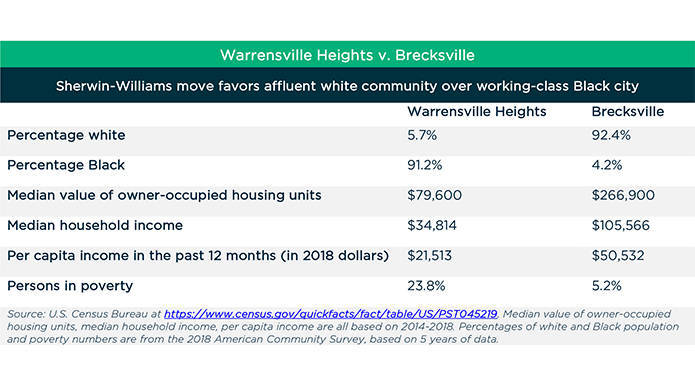 “There is an alternative: State policymatters could learn from Kansas City. Last year, the Republican governor of Missouri and the Democratic governor of Kansas agreed not to use tax incentives to get companies to move across the state line in the Kansas City area. Governor DeWine should lead an effort to end unproductive incentive competition that siphons public resources without increasing overall prosperity.

“Wherever one comes down on the broader debate over incentives, there is little question that Cleveland and Ohio will soon find themselves scratching for revenue. That means Cleveland City Council should delay its decision on the incentive package. And Ohio and JobsOhio should reconsider the incentives they are about to award.”