13 so far: Number of hearings held by Ohio’s Senate Judiciary Committee for testimony on SB 3, a bill that would overhaul our drug sentencing laws. The bill has languished for more than a year and remains stuck in committee. Senior Researcher Amanda Woodrum and Digital Communications Manager Ben Stein used that time to co-write a health impact analysis of SB 3 and its sibling, HB 1. Produced using methodology created by the Pew Charitable Trusts, the “Health Note” considers how sentencing reform would improve public health, and models a framework for evaluating bills based on health impact.

Nearly 300: Number of laws that bar Ohioans from employment if they have a felony drug conviction. SB 3 and HB 1 would reduce the number of Ohioans harmed by those laws. That’s just one of the positive impacts described by our panel in this week’s press teleconference on sentencing reform and public health. The call featured Piet van Lier, our justice reform research consultant, and other leaders in the effort to change how Ohio treats people with addiction. (Check out News 5 Cleveland’s coverage of the event.)

80+, 1: Respectively, the number of testimonies against and for a bill that would reduce opportunities for early voting—a move that would disproportionately harm Black and brown communities all over Ohio. (The 80 opponents included the NAACP, League of Women Voters of Ohio and the Ohio Council of Churches; the lone proponent was the bill’s sponsor.) As Project Director Kalitha Williams spells out in a recent op-ed for the Columbus Dispatch, securing fair elections is one of the many ways Ohio’s leaders must take concrete anti-racist action in order to undo centuries of systemic racism. 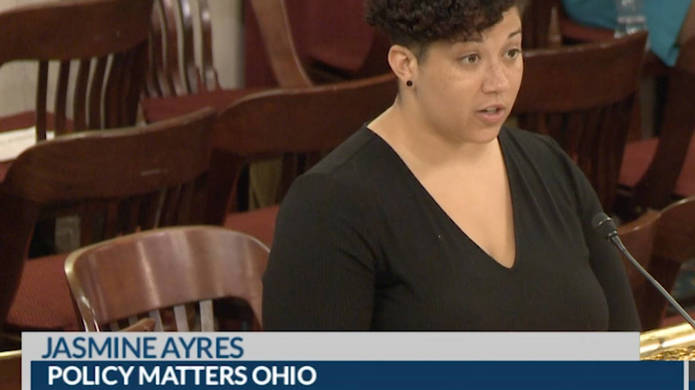 14%: Share of Ohioans who identify as Black. But Black Ohioans account for 25% of our COVID cases, despite being drastically under-tested. The disparity is the latest piece of evidence that racism is a public health crisis. A resolution before the Ohio Senate would declare it so. Policy Liaison Jasmine Ayres testified in support of the resolution, stressing that legislators would have to back up their words with anti-racist action. Check out the video, courtesy of the Ohio Channel. (Jasmine's testimony starts at 2:51:40.)

At least 825,000: Number of Ohioans who will lose their health insurance if the Trump administration and 18 state attorneys general convince the Supreme Court to strike down the Affordable Care Act. The decision will likely come in the first half of 2021, when we’re expecting a 10% unemployment rate and when the COVID-19 pandemic may still be spreading. Senior Project Director Wendy Patton wrote about the potentially devastating effects of this cruel and petty attack on working people and their families.

1,215,756: Number of Ohioans who have filed initial jobless claims in the last nine weeks. That’s just one of the astonishing numbers in this month’s JobWatch, from Researcher Michael Shields. Far too many of them could lose unemployment compensation if they refuse to return to a job that puts their health at risk. That’s why we teamed with Ohio Poverty Law Center to demand Gov. DeWine protect working people from having to choose between their lives and their livelihoods. We were somewhat encouraged by the governor’s effort to do so in an executive order signed last week. While the order is a win for some Ohio workers, it leaves many triply vulnerable: to the pandemic, the recession, and to unscrupulous employers.

3.8 million years: That’s how long it would take the average Amazon worker, working full time, to earn $110 billion, the current net worth of Amazon CEO Jeff Bezos. That’s according to “Clean Slate for Worker Power,” a new report from the Labor and Worklife Program at Harvard Law. In a guest blog post, our friend Michelle Rose—an alum of the Obama Labor Dept.—describes the report’s long-term vision for how labor law should work, and how it can guide action right now. We’re working with Michelle and a growing coalition of labor unions and community leaders on one of those immediate actions: creating a workers’ center in Northeast Ohio!