1 million: That’s how many fewer manufacturing jobs there are in Ohio, Michigan, Pennsylvania and Wisconsin since 2000. Researcher Michael Shields and partners at the Century Foundation and Groundwork Collaborative released a new report that shows how for 30 years, corporations have used their influence to rig the rules in their favor – shipping jobs overseas, quashing union drives and lining their pockets with public resources. This trend continued under the Trump Administration. COVID wiped out manufacturing job gains between 2013 and February of this year. 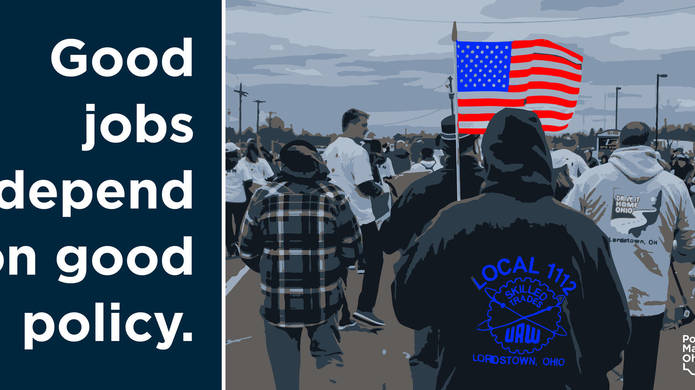 31: That’s how many days are left until the election! Did you watch the debate? We did. And Executive Director Hannah Halbert set the stage for what Ohio needs with an op-ed published in the Columbus Dispatch on Tuesday. While a lot of it didn’t get addressed by the candidates, who were too busy discussing other matters, we’ll keep listening for their plans to support working people, address racial disparities and help Ohioans get through the pandemic and recession.

$2.2 trillion: The U.S. House of Representatives passed another $2.2 trillion COVID relief package. The question is whether it will make it through the Senate and be signed by President Trump. Ohioans can’t wait, Senior Project Director Wendy Patton wrote in an Ohio Capital Journal op-ed last week.

2nd: Columbus became the second big city in Ohio to pass an ordinance that protects working people from having their wages stolen by employers. Hannah and our friends at the Central Ohio Worker Center worked hard to make it happen. We can’t wait to see what other cities take up the cause.

$9.81: That’s the hourly wage for waiters and waitresses in Dayton, Hannah wrote in a Dayton Daily News Op-ed. She pointed toward the findings in our recent State of Working Ohio report and called on policymakers to reset and unrig the economy so whether you’re a server or a CEO, you have enough to live a decent life.

630: The Fresh Start Act, House Bill 263, would scrap 630 rules that limit job opportunities for Ohioans with certain felony convictions. It passed in the Ohio House of Representatives already and last week Michael called on the Senate to do the same.

130,000: That’s how many jobs the federal government’s $600-per-week payment to unemployed workers supported through consumer spending, Michael wrote in an op-ed for Cleveland.com.

510,000: About 510,000 Ohioans are still unemployed, according to the most recent jobs numbers. Meanwhile, Zach Schiller testified against a bill he said would help employers report complaints about unemployed workers not meeting benefit requirements. “Lawmakers should instead spend more time making sure if workers are laid off they can easily access adequate unemployment benefits,” Zach said.

On October 7 at 11 a.m., join Hannah, Michael and friends from Ohio Organizing Collaborative and Justice for Migrant Women for a conversation about essential workers, resilient communities and civic action in solidarity with working people on Facebook Live. They’ll be joined by our outreach director Daniel Ortiz live outside the Cuyahoga County Board of Elections, to talk about the importance of voting and the role we all play in our shared democracy.

On October 19 at 10 a.m. Wendy will moderate a webinar for The Ohio Healthy Homes Network. This webinar will discuss the latest national news on lead service line replacement, how Ohio's laws and policies compare to other states, new bi-partisan LSL legislation in the Ohio House and community organizing to secure LSL replacement for a central city Toledo neighborhood. Register here.