$1.94 billion: That’s how much in public resources could go to public schools, public health and more if Ohio policymakers adopted our proposals to rebalance the state tax code. Senior Project Director Wendy Patton outlined our plan in a new paper. Board member and president of the Ohio Federation of Teachers, Melissa Cropper joined Wendy for a press call where she discussed how the proposal could help all children, no matter where they live or what they look like, attend excellent public schools. We also got an assist from Sheila Reynertson of New Jersey Policy Perspective. She joined the call to talk about the millionaires tax recently signed into law by the New Jersey governor. Help us get the word out by sharing this Facebook post. 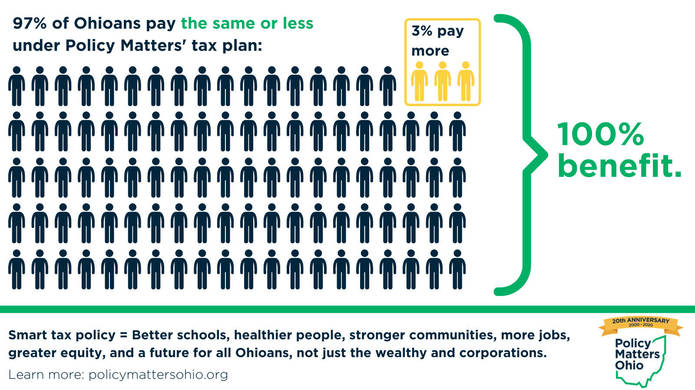 54%: That’s the share of jobs lost at the start of the pandemic recession that have returned, according to Researcher Michael Shields’ JobWatch report. Ohio employers added 41,500 in September, a dip from the 45,000 jobs regained in August. The sluggish recovery shows why it’s so critical for state and federal leaders to do whatever they can to get everyone through this downturn.

857,000: That’s how many Ohioans have health care thanks to Medicaid expansion and the Affordable Care Act marketplace, Wendy wrote in a blog. Next month, the Supreme Court will hear a case that could overturn the ACA, even though it has made Ohio a healthier state and supported the economy, too. The ACA has also reduced some of the barriers to good health care that disproportionately harm Black and brown Ohioans.

$28 million: Last month, the Ohio Tax Credit Authority approved an agreement requiring General Motors pay back $28 million of the $60 million in tax credits it received to operate its plant in Lordstown. The authority also required GM to pay another $12 million for education, training programs, and infrastructure in the Mahoning Valley. Yet at the very same meeting, Research Director Zach Schiller writes, the authority also approved an estimated $13.8 million in new incentives for another GM venture.

8 million: The New York Times reports that 8 million people have fallen into poverty since May as federal aid ran out. Last week, Executive Director Hannah Halbert called on federal leaders to step up and pass the relief Ohioans need.

On October 21 at 11 a.m., Zach will speak at “Ohio’s State of Unemployment” town hall with Sen. Sherrod Brown. Register here.

Join ReImagine Appalachia on October 22 at 6 p.m. for a digital rally for good jobs and strong communities. Register here.

On October 28 at 7p.m. we’re hosting a virtual screening and panel discussion of The Disrupted, a documentary that follows three hardworking Americans, including a laid-off factory worker in Lorain. The panel will be moderated by Outreach Director Daniel Ortiz, a Lorain native. He will be joined by Michael, who recently completed a major study on manufacturing in the Great Lakes Region, the film’s director, and experts on sustainable agriculture and the gig economy. Register here.