11.7 million: That’s how many people live in the state of Ohio, and the number of people who will be affected by the state budget. The budget belongs to all of us. Every two years we publish a guide to the state budget process. We explain when decisions are made, who makes them and how it’s all funded. It’s something we should pay attention to even in normal times – but now it’s more critical than ever that we make our voices heard.

4.9%: Share by which Native Americans living on reservations were undercounted by the 2010 Census. That’s just one example of how poor data collection and reporting misrepresent and diminish Native people. In reality, Native Americans live in big cities and in small towns; they are our neighbors, coworkers and friends. For centuries, certain leaders have tried to erase them, except to reduce them to caricatures and mascots. We can change that, starting with how we collect and analyze data. In a new blog post, Development Director Cynthia Connolly (Little Traverse Bay Bands of Odawa Indians) recognizes Native American Heritage Month and makes the case for decolonizing data for a better, more equitable future.

110,000: In our monthly JobWatch report, Michael Shields points out that some 110,000 Ohioans have exhausted the 26 weeks of regular unemployment compensation and are now receiving extended benefits, so it’s critical that Congress renew the $600-per-week unemployment supplement. Shields reported that Ohio employers added 30,800 jobs last month, according to the Ohio Department of Jobs and Family Services business survey. Despite the gains, there are 353,600 fewer jobs in Ohio compared to this time last year. That’s why it’s critical that state policymakers waive the requirement that people who receive unemployment benefits must look for jobs.

$302 v. $624: A child who is going through the trauma of being separated from their parents needs support, no matter who cares for them. But in Ohio, a child and who goes to live with a friend or relative receives less support from the state than a child cared for by a foster parent. In Cuyahoga County, a kinship caregiver receives $302 a month to care for one child while a foster provider receives a minimum of $624. A federal court ruling was supposed to change this, but Ohio remains out of compliance with the federal law. Will Petrik writes that by failing to address this discrepancy, Ohio policymakers are harming many families, especially Black children who are more likely to be cared for by a family friend or relative. We were pleased to see the Marietta Times agreed.

$200 million: Ohioans could lose $200 million of our public resources over the next two budget years if lawmakers don’t plug a major hole in our tax system, Zach Schiller wrote. That’s money that should be covering the costs of the pandemic and expanding opportunities for all Ohioans - not just the wealthy few.

8: Number of mayors of major American cities who jointly authored a recent opinion piece in the Washington Post calling for a “Marshall Plan for Middle America” and citing our work with the ReImagine Appalachia coalition. Dayton Mayor Nan Whaley, Youngstown Mayor Jamael Tito Brown, Cincinnati Mayor John Cranley and Columbus Mayor Andrew Ginther were among those calling for “long-term regional investments in Appalachia’s rural and suburban communities” in the form of big federal block grants to create jobs in climate-healing and clean energy industries. All of which will sound familiar to fans of the ReImagine Appalachia blueprint. (The RA coalition got another big signal boost when The Atlantic cited the WaPo piece in an article of its own.)

“Advancing Racial Equity in Ohio’s Schools,” a virtual forum presented by The City Club of Cleveland, will stream live on Friday, December 4, from 12:30-1:30 pm. For more information, check out the event page. 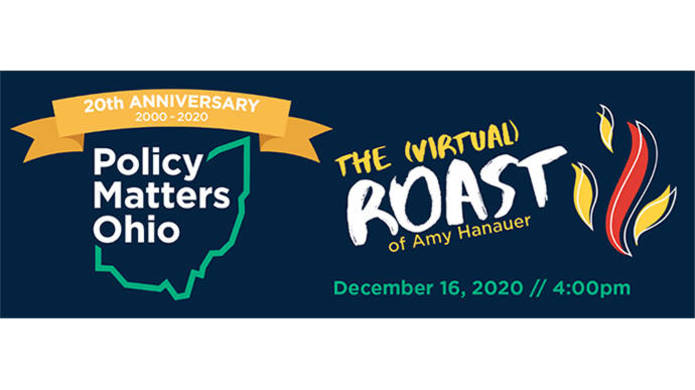 Our original celebration may have been postponed, but it’s still our 20th birthday, and we’re not letting Amy off the hook!

Thanks to a generous donor, Policy Matters Ohio is able to match all new and increased donations up to $100,000! A match-eligible donation with registration gets you a mini ROAST of your own (up to 50 words)!