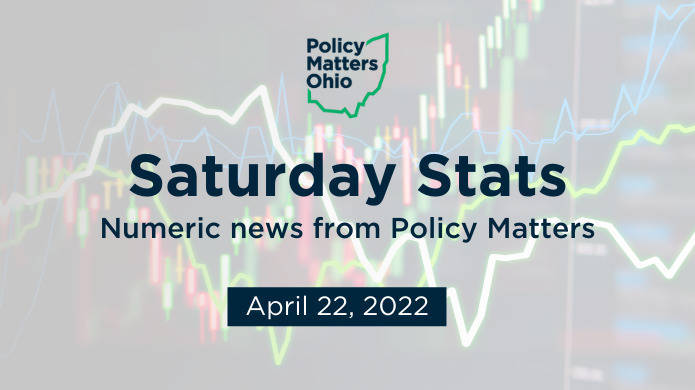 82.9%: Ohio has restored 82.9% of jobs lost to COVID-19, but still needs 146,100 jobs to recover our pre-COVID number from February 2020. In this month’s JobWatch, researcher Michael Shields wrote that Ohio is following the nation in a quick recovery, but state and local governments’ failure to restore critical public services is slowing us down. New federal dollars coming to state and local governments are an opportunity to keep the recovery moving and direct resources to the hardest hit.

13: Speaking of federal funds…This week we released our “Funding Our Future” project, which contains 13 briefs to help advocates, activists, residents, and policymakers understand some of the ways the huge influx of federal dollars flowing into our communities can be spent. Each brief is accompanied by a short video. Nearly every staffer contributed to this effort, and there’s just about something for everyone. Check them out!

Ensure all workers are paid what they’re owed

7,000: That’s how many people went to see Spinderella cut it up one time at Environmental Health Watch’s Fresh Fest last year (Bonus points for the readers who get that reference). Environmental Health Watch does a lot more than organize amazing community festivals. As part of our Doing the Work series that spotlights some of our most important community partners, Caitlin Johnson wrote about how the organization protects children’s health by making Cleveland lead safe. EHW also helped reimagine neglected areas like the city’s so-called “Forgotten Triangle” as a vibrant urban farm. Please give the blog a read and consider donating so they can keep making systems change in Cleveland.

75%: Of the more than 1,600 people in Cuyahoga County jail as of last week, 75% were being held on bail before their trials, according to comments made by Piet van Lier before Cuyahoga County's Justice Center Executive Steering Committee. Piet was among the people testifying about the construction of a new county jail. He asked the committee to consider the impact of detaining people in jail simply because they can’t afford to buy their freedom. His comments were recorded by a member of Cleveland Documenters. Watch them here and read the entire Twitter thread of the hearing.

10: Policy Matters, led by Research Director Zach Schiller, was among the organizations that co-developed 10 recommendations to reform Cleveland’s tax abatement policy. The recommendations focus on tailoring abatements to the needs of specific neighborhoods and encouraging investment in communities that are often left behind. Read this Twitter thread from Emily Lungard of Enterprise Ohio for a great overview. In a separate letter to city officials, Zach and Executive Director Hannah Halbert underscored the need for significant differentiation in the amount of abatement allowed in different neighborhoods.

48%: Nearly half of Kroger’s employees make $15 an hour or less, according to the Economic Policy Institute’s Company Wage Tracker. You can look up a lot of major corporations, but we always like to highlight Kroger, since they’re one of Ohio’s biggest employers and our report last year shows CEO Rodney McMullen makes 909 times as much as the typical employee.

$10,000: Cleveland.com/The Plain Dealer is giving away $10,000 for a marketing campaign to a nonprofit that gets the most votes from the community. We threw our hat in the ring so more people can learn about policies that will make our community healthier, happier, and more prosperous. Please vote for us!

On Sunday, April 24, 1 to 4 p.m., Honesty for Ohio Education is hosting a virtual public forum for Ohio’s students. Workshops will focus on the history of student activism, strengthening advocacy skills and more. Register here.

On Tuesday, April 26 from 5:45 to 7:00 p.m. Daniel Ortiz will moderate a panel about systemic racism in criminal charging. Register here.