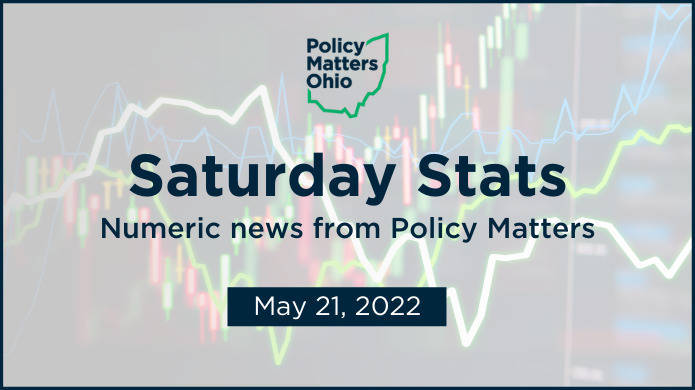 213,000: Researcher Michael Shields found that Ohio employers steal from some 213,000 working Ohioans each year by paying them less than the minimum wage — just one of many types of wage theft. A person who stays on the job all year would lose an average of $2,873, or a quarter of their take-home pay. This week, he joined Sen. Sherrod Brown to call for better federal wage theft protections and release his analysis on wage theft in Ohio. Check out this article about the event, from Cleveland.com. And please watch and share Michael’s wage theft TikTok explainer.

$350 billion: President Biden directed state and local governments to use $350 billion of the $1.9 trillion pandemic relief bill for public safety. With the state government and many cities using the money to double down on disproven law enforcement strategies, The New York Times asked Hannah Halbert about better ways to spend the funds. “The funding should be used to help residents hit hard by the pandemic and help them with longstanding disparities,” she said.

4%: During the pandemic, just 4% of the fraud in Ohio’s unemployment system involved regular state benefits, an amount that was in line with the rate during non-COVID times. But in testimony before the Senate Insurance Committee, Zach Schiller pointed out that Senate Bill 302 mistakenly uses the widespread fraud involving federal unemployment benefits, which were cut off last year, to increase restrictions and barriers in the state system. Zach said the bill should address the problems thousands of unemployed Ohioans had trying to get benefits during the pandemic, but that it does nothing to improve access. You can watch his spirited exchange with the committee chair here, starting around 1:28.

85%, 90% and 100%: Mayor of Cleveland Justin Bibb’s administration proposed capping the amount of residential tax abatements for new housing and targeting them according to neighborhood characteristics: 85% for those with the strongest housing markets, 90% for middle-market areas or 100% in “opportunity neighborhoods” where the housing market is weakest. Zach spoke about the importance of a targeted approach before Cleveland City Council’s Development, Planning & Sustainability Committee. While the proposal for the first time creates caps on certain abatements and some backing for affordable housing, it needs a lot of strengthening to be truly effective. The proposal will be amended further and likely will go to city council for a vote Monday.

80%: Zach wrote an op-ed in the Columbus Dispatch calling for lawmakers to ensure 80% of the jobs created by the Intel deal go to Ohioans. He said that in New Mexico, the corporation committed to 60%, and considering Ohio has a bigger workforce, 80% is reasonable. That’s just one of the recommendations he made to ensure that the deal does the most good possible for the people of Ohio.

$200,000: Our friends at College Now Greater Cleveland and the Ohio Student Association wrote an op-ed in Cleveland.com calling on state lawmakers to allocate just $200,000 to help more Ohioans access the federal Public Student Loan Forgiveness Program. College Now Greater Cleveland has already helped many Ohioans save $170 million, but with more funding from the state, even more people will be able to give back to their community without being overburdened by student loans.

+1: We’ve added a new staff member! Ali Smith joins Policy Matters Ohio to coordinate work among Ohio’s three worker centers. Ali was born and raised in Stark County, to a family supported and empowered by union steelwork. She now lives in the Hocking Hills area and is passionate about building power for all workers. Keep an eye out for a formal announcement & press release next week! In the meantime, welcome Ali!!

On May 21 at 11 a.m., Honesty for Ohio Education will host a Rally for Justice in Education at the Federated Church in Bainbridge. Participants will learn how to fight back against bills that could whitewash our history, censor our teachers and target kids based on their race, gender or sexual orientation.

The Northeast Ohio Worker Center is hosting an open meeting on May 26th from 12 to 1 p.m. It's virtual and a great chance for folks both new and known to the worker center to catch up and get involved. Email Grace at heffernangs@gmail.com for zoom details.

On Thursday, June 2nd at 3 p.m., our partners at ReImagine Appalachia kick off their Industrial Summer event series with “Make it in Appalachia: Manufacturing Listening Session.” They’ll tackle some important questions such as: How can we make sure the future of manufacturing is as environmentally friendly as possible? Register today!