$50,000: That’s how much less per year Ohio’s wealthiest 1% are paying in taxes, compared to what they paid in 2005. It’s one result of a broken tax code that shortchanges all of us—especially our schools. We went live on Facebook with Ohio Education Association and Ohio Organizing Collaborative to discuss how the All In For Ohio Agenda will fairly and fully fund our schools (and much more) by making the wealthy pay what they truly owe. Watch the full video here.

$650 million: The Ohio Tax Credit Authority is considering another huge tax credit for the Intel project, estimated to be worth $650 million. Before it goes through, Zach Schiller says the authority should seek an estimate from the Department of Taxation on the cost of the tax breaks for Intel that lawmakers already approved in the capital bill. “Policymakers are giving our public dollars to Intel without understanding how they might affect state and local governments’ future ability to provide critical services like public education or trash collection,” he said.

100,000: Number of Ohioans whose hard-won pension benefits are now guaranteed, thanks to action by the Biden administration earlier this month. The President announced this win for working people at an event in Cleveland, attended by Executive Director Hannah Halbert and Communications Director Caitlin Johnson, who offered pre- and post-event analysis on TikTok. Ahead of the visit, we released this statement, identifying ways federal action has helped Ohioans get back to work, and what the administration will need to do (and not do) to keep our recovery on track.

11: There are 11 elected members of the Ohio State School Board. Gov. DeWine has proposed new districts that critics, including Honesty for Ohio Education and our own Piet van Lier, say violate Ohio law and disadvantage Black and brown communities.

26th: Ohio’s “child spending rank” among the states, as determined by a new analysis from the Institute on Taxation and Economic Policy. Ohio is among those identified as an abortion-restricting state that does too little for kids once they’re born. For more, check out this blog post from ITEP’s Executive Director — and founding E.D. of Policy Matters — Amy Hanauer.

75: It took 75 months to recover the private-sector jobs lost in the Great Recession. This time around it took only 28 months to recover from the COVID recession, according to the Economic Policy Institute’s chart of the week. That’s because Congress deployed massive federal resources, including the American Rescue Plan Act. Read about it in more detail here. 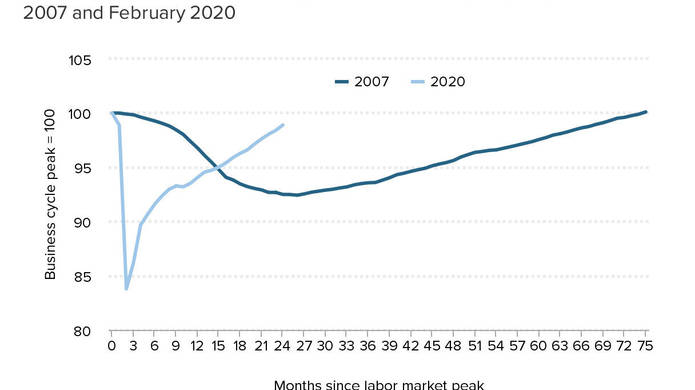