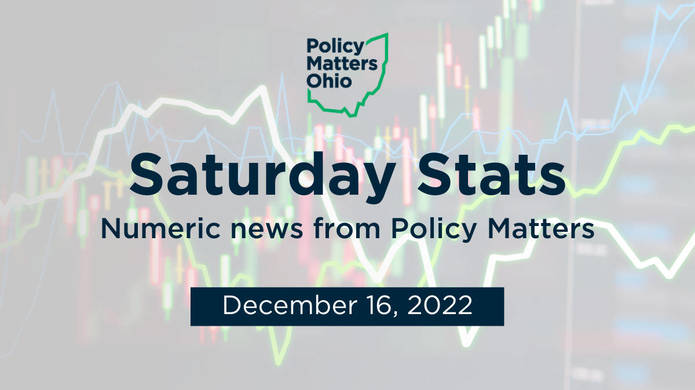 0.6 points: That is how much the inflation rate dipped last month, signaling that price increases are starting to slow. In his monthly JobWatch report, researcher Michael Shields says that, coupled with the fact that Ohio has about 100,000 fewer jobs than before COVID, shows that the Federal Reserve should slow interest rate hikes that cause layoffs.

$600 million+: That’s how much shady employers cost Ohio workers each year by stealing their wages. That’s why we were so thrilled when Cleveland City Council passed an ordinance to protect working people and hold dishonest employers accountable. This important progress is due in large part to the efforts of our friends, the Guardians for Fair Work. Hannah Halbert said we can’t stop there.

6%: Since COVID began, only 6% of Ohio’s fraudulent overpayments of unemployment compensation were in the state’s regular program. The rest were all federal programs that were ended in Ohio more than a year ago, Zach Schiller testified against House Bill 302 before the House Government Oversight Committee. He explained how the bill does nothing to address the underlying problems in Ohio’s unemployment compensation system, yet lawmakers passed it during the lame duck session.

56.6%: That is the percentage of Ohioans who in 2006 voted to raise the minimum wage and tie it to inflation. Without it, our minimum wage would be $7.25, the federal level, instead of adjusting from $9.30 to $10.10 in 2023, as Caitlin Johnson explained in a TikTok. That is just one of the reasons Hannah Halbert submitted testimony in opposition to House Joint Resolution 6, Secretary of State Frank LaRose’s plan to require citizen-initiated ballot amendments pass by 60% instead of a simple majority. It’s also why some of our staff joined the rally against HJR 6, which, due to all the public outcry, stalled in lame duck. (Watch Hannah’s TikTok here.)

19: There are 19 members of the Ohio School Board and for now, they will continue to oversee public education in Ohio. The General Assembly failed to pass Senate Bill 178 which would have stripped much of the board’s power and put it under control of the governor — a move many think was intended to thwart its new progressive majority. Piet van Lier and many others testified against the bill, which in one of the few lame duck bright spots, failed to pass. In one of the more egregious examples of lame duck desperation, policymakers tried to combine the bill stripping the State Board's powers with House Bill 151, an attack on trans kids who just want to play sports. But Ohioans came together to express our outrage and that bill failed, too.

13: After getting sworn in this week, Piet is one of 13 members of Cleveland’s new Community Police Commission. The commission was established last year, when voters passed Issue 24, a police accountability measure. Watch Mayor Bibb’s video about the commission here.