Good morning Chairwoman Fudge, esteemed members of Congress and staff members of the subcommittee. Thank you for the opportunity to testify about the state of our elections and for convening these field hearings. My name is Daniel Ortiz, and I am outreach director for Policy Matters Ohio, a nonprofit, nonpartisan organization working for a more vibrant, equitable, sustainable and inclusive Ohio for everyone. My electoral experience began when I joined my parents as they went door to door canvassing for my father’s election to city council. I’ve volunteered to register voters since 2006 and organized youth with a curriculum on the history of the struggle for voting rights. I have worked professionally for political campaigns and coordinated voter protection programs. I still volunteer for local voter registration and civic engagement initiatives. 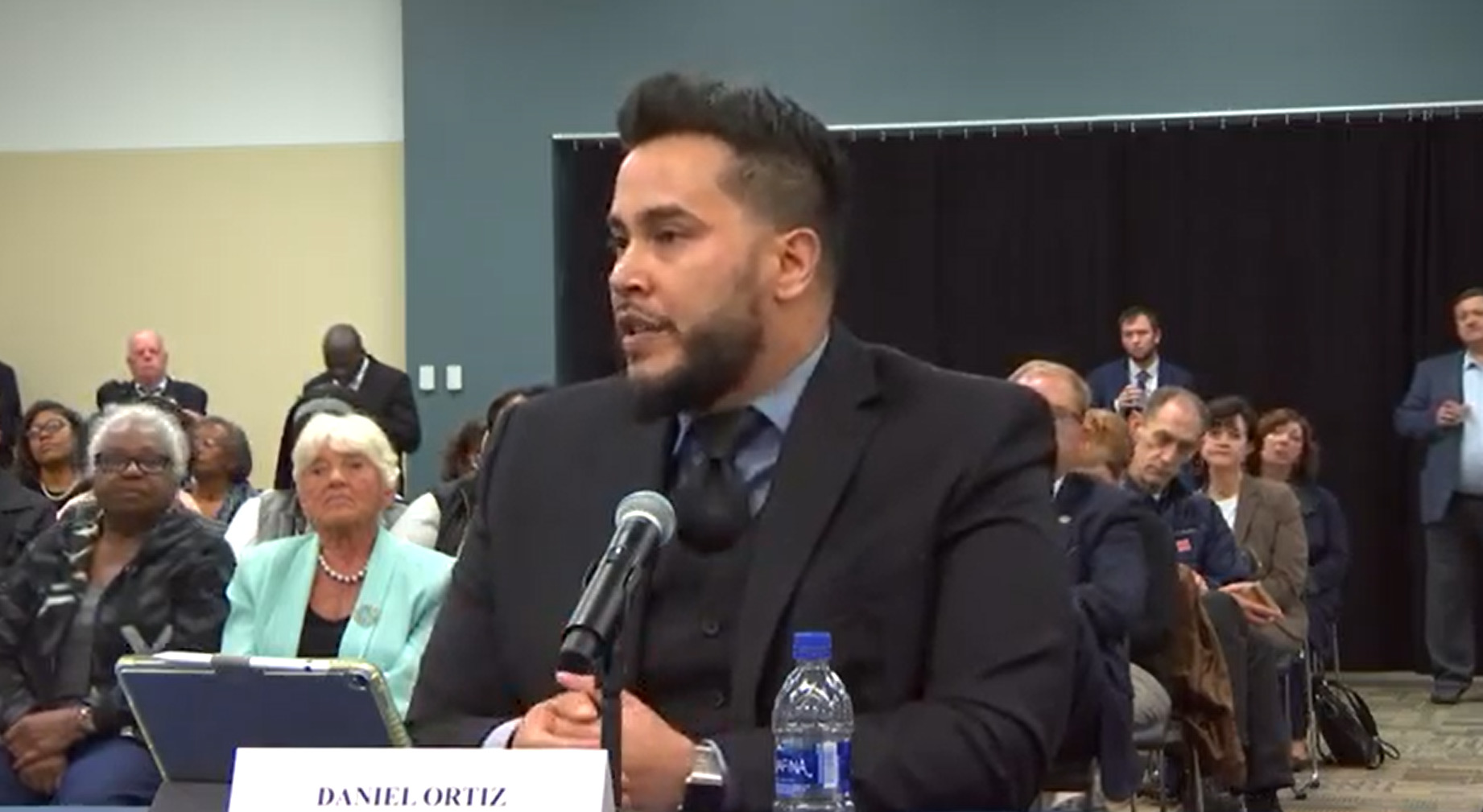 The integrity of our elections relies upon broad access to the vote, a transparent process to safeguard the integrity of the ballot and straightforward access to the polls. Unfortunately, our country has a sad history of making it difficult for racial minorities and other groups to vote. Reports of obstacles to voting such as polling location closures, voter identification requirements, language-access problems, mail delivery issues, low voter turnout rates, inflexible work schedules, and transportation issues, are rampant. These challenges are most widespread in states formerly covered by the Voting Rights Act but are alive and real in Ohio as well. Our struggles are not the same but they are similar. In 2016, the legislature and then Secretary of State Husted eliminated Ohio’s Golden Week, the period when citizens could register to vote and cast an absentee ballot on the same day. Since then, many have found it harder to vote. The 2013 ruling of Shelby County v. Holder took away many protections but the specific loss of preclearance for areas with historic voter disenfranchisement has aged poorly. Last year we saw horrifying evidence for the need for those provisions from the Native population in North Dakota, the Latino population in Dodge City, Kansas and the Georgia gubernatorial race. In Ohio we have experienced more subtle erosion of our voting rights but the results are devastating nonetheless.

The 2018 Supreme Court decision of Husted v. A. Phillip Randolph Institute made it easier for states to purge people from the voting rolls. I’d like to echo the dissenting opinion of Justice Sotomayor that, “Congress crafted the National Voter Registration Act of 1993 (NVRA) with the understanding that, while States are required to make a “reasonable effort” to remove ineligible voters from the registration lists, §20507(a)(4), such removal programs must be developed in a manner that “prevent[s] poor and illiterate voters from being caught in a purge system which will require them to needlessly re-register” and “prevent[s] abuse which has a disparate impact on minority communities,” S. Rep. No. 103–6, at 18.”[1] Sotomayor goes on to point out that in a majority African-American neighborhood of Cincinnati in Hamilton County had 10% of their voters removed for inactivity compared to only 4% of voters in suburban neighborhoods. Most people who follow campaigns and elections will attest that you win in the margins. The partisan urge to lock in an electoral advantage by manipulating the law will continue until there are clear laws to stop it.

In Ohio, the closure of polling locations and consolidation of precincts combined with a lack of reliable transportation options and ample time off from work make it hard for many vulnerable communities to vote. Since 2012, Ohio has closed more than 300 polling locations across the state, a disproportionate number in urban areas.[2] A specific analysis of reports available on the Cuyahoga County Board of Elections’ website shows there were 423 voting locations in 2012[3] compared to 345[4] in 2018, leaving the residents of Ohio’s second most populous county with 78 fewer polling locations. That challenge alone will sideline many voters, especially those who do not own cars. For decades, Ohio has underinvested in public transit and roughly 1 percent of the state’s transportation spending goes toward public transit.[5] Although we are the seventh most populated state, Ohio spends $.63 per capita on public transportation, ranking 40th among states for commitment to public transit.[6] This presents us with an intersection of issues that is reminiscent of the struggle for civil rights.

In my work to support community voter education initiatives, I find that bilingual resources are often lacking. Unfortunately, the problems facing Northeast Ohio’s Latino community are unique and likely growing. This is especially true for the recent arrivals coming from Puerto Rico. Puerto Rico is currently in the midst of a migratory wave, with 500,000 leaving the island between 2006 and 2016. According to September 2018 estimates, net migration from Puerto Rico to the mainland United States was as many as 176,603 people in the one-year aftermath of Hurricane Maria.[7] This will likely eclipse the wave of migration that brought my parents to Lorain, Ohio in the 1950s. Prior to the hurricane, Ohio’s Puerto Rican population nearly doubled in size from 66,269 in 2000 to 124,970 in 2017. Recent demographic research shows that Ohio’s Puerto Rican population is considerably younger, less educated and more likely to be poor compared to Puerto Ricans living on the island or in other states.[8] Over 18% of Puerto Ricans in Ohio reported speaking English less than “very well,” which is slightly higher than the average. In Northeast Ohio many recent arrivals’ biggest concern in resettlement is the struggle to find stable, long term housing. This is a cause of concern for anyone who cares about the diaspora community and would like to see these folks assimilate into active participants in our democracy.

Puerto Ricans are American citizens but our electoral process can often be jarring in how different it is from Puerto Rico. Election day in Puerto Rico is a holiday and, “turnout ranged from 86 percent and 90 percent for the general population between 2000 and 2012,” with a notable dip in 2016.[9] Local groups like Bienvenidos a Cleveland and Bienvenidos al Condado de Lorain have coordinated the support of the nonprofit community, educational institutions, health and human service agencies, faith organizations and other community-based groups. Yet civic education is understaffed and under resourced. Throughout this work civic education has been a challenge and often is missing a culturally appropriate context. Cuyahoga County Board of Elections has done well to comply with the consent decree of 2011 and provides bilingual ballots but I am concerned about the future work of a committee that they launched on civic education and hope to see a commitment to bring future efforts in house. Currently, civic education efforts in the Latino community are held together by dedicated volunteers with support from staff at other agencies but with modest staffing levels any employee turnover can result in a critical blow during an election year.

Any additions to the Voting Rights Act should help expand preclearance coverage to state’s like Ohio. Voting somewhere near your home, on a major transit line, with a ballot in your most familiar language should be the norm, not the exception. We should be making it easier to vote. Voters should not have to worry about what rights they’re losing between elections – if their early voting period is being cut, whether they have been purged from the voter rolls and need to re-register, if their polling location has been shut down or combined and how far they will have to travel to vote. I cannot tell you what the future of the Voting Rights Act looks like but I do ask that you consider what justice looks like. Help us bridge the divide. Consider solutions for those most burdened groups in high poverty, with language barriers, with low educational attainment and less experience voting. If we make our elections work for them, our county, state and country will be better for it.

Thank you for the opportunity to testify. I look forward to the chance to answer any questions.

[2] How the Gutting of the Voting Rights Act Led to Hundreds of Closed Polls, Rob Arthur and Allison McCann, https://news.vice.com/en_us/article/kz58qx/how-the-gutting-of-the-voting-rights-act-led-to-closed-polls